Anyone here watch it??? I watch every week. Just started watching tonights show and guess what!!! They're flying out of my town on this episode. I was just talking to a motel owner in town who said some of the guys from the show were staying at his motel..which just down the street from my house..
Click to expand...

Well-known member · 43 · From Murillo, Ontario, Canada
anything outdoors, hunting, fishing, camping, atv'ing
GOLD Site Supporter
What is it about and where it the link?

fogtender said:
What is it about and where it the link?
Click to expand...

It looks like it is only shown in Canada. Its not listed on the US site, only history.ca

Jim
Guess it's only aired here same as that License to Drill show. Same basic type of show as Ice Road truckers

Geez, we get all the good shows while you guys are stuck with shows like Survivor and the 24hr Obama teleprompter channel.

jim slagle said:
It looks like it is only shown in Canada. Its not listed on the US site, only history.ca


Well that sucks, they get a good show and keep it to themselves...
Tonight's show was a good one. Here's a bit of past history on the previous shows....

The crew from Buffalo airways owns several cl-215 waterbombers. They sold two of them to Turkey. Over the past few weeks episodes, they were flying them across the country and north atlantic during the wintertime to get them to Turkey. One of the cl-215's had an engine governor malfunction over the north atlantic shortly after taking off from a fuel stop on a small island airport. They had to return to the airport on one engine only while the other cl-215 continued on to Turkey. After waiting for parts to arrive for 12 days, they finally got on their way and made it to Turkey. Part of the deal with the sale of the waterbombers was that they had to train Turkish flight crews how to fly them as they are the first cl-215's to be in Turkey.

Tonight's episode had the pilots from Buffalo airways giving flight instructions to Turkish pilots doing take offs and landings at a remote airstrip. The Turkish pilots were taking turns doing touch and go's on the runway. The first two pilots to practice landing did it perfectly. The third......well....not so much. He forgot to drop the landing gear before touching down. The cl-215 scraped along the runway and before they managed to get it back in the air, it wore a 12 ft section clear off the bottom of the plane. They managed to lower the landing gear once in the air again and circle around. When the plane scraped along the runway, it also tore apart hydraulic lines going to the front landing gear. They managed to circle around and land the plane but had no brakes to stop it or steer for that matter. The plane came to a stop with the front landing gear barely rolling off the runway.

With the fire season being only weeks away and one of the planes out of commission for at least a few months till repairs can be made, Buffalo airways struck a deal with Turkey to loan another one of their cl-215's. Next week, they will be flying the replacement cl-215 through a blizzard to get it to Turkey on time. Keep in mind that these planes do not have de-icing on their wings since they are only used in summer and can only be flown visually(VFR). 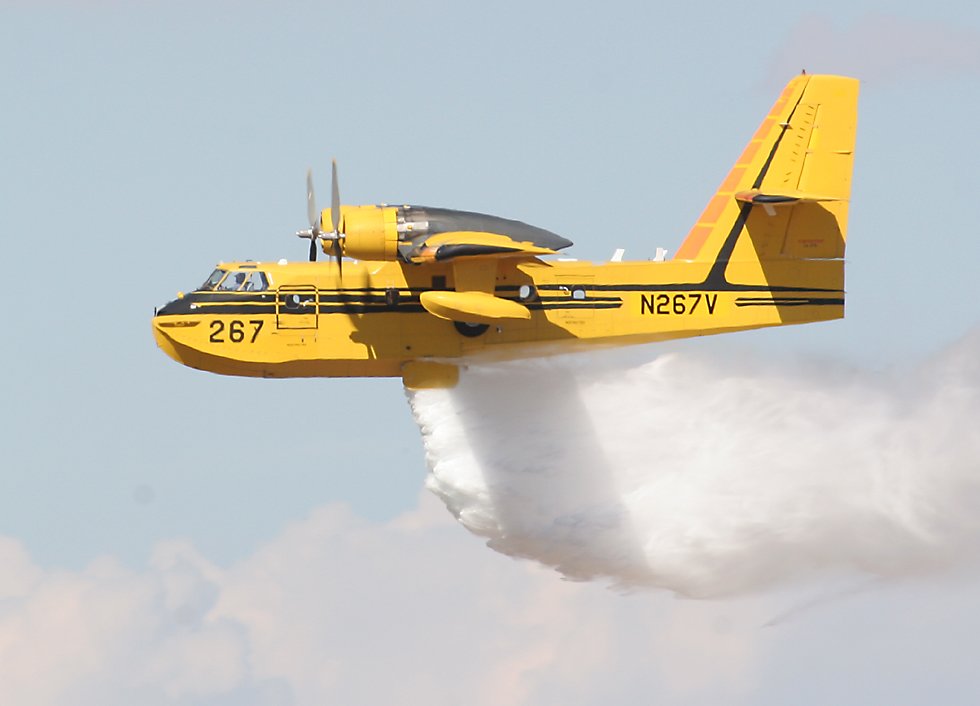 So did the instructor not know how to read a check list for landing?
I understand the new guy screwing up, seems like the trainer would
have caught the gear thing.
They kinda left that up in the air (no pun intended) for next weeks show. They said there are safety warnings that come on in the cockpit when the gear isn't down so the instructor should have heard it. Someone's going to be in big kaka over that one.
This is mild compared to what a big plane does in this situation...

[ame="http://www.youtube.com/watch?v=2hMn7ZweF6s"]YouTube- Gear Up Landing[/ame]
then there are pilots who lift their landing gear too early when taking off.