GOLD Site Supporter
A policeman on a horse approaches little Johnny on a bicycle and says, “Nice bike you’ve got there. Did Santa bring you that?”
“Yep,” replies the little boy.
“Well, tell him to put a reflector light on it next year!” he says, and fines her $5 for it.
Little Johnny looks up at the policeman and says, “Nice horse you’ve got there. Did Santa bring you that?”
The cop chuckles and replies, “He sure did!”
“Well,” says Johnny, “next year tell Santa that the d–ck goes under the horse, not on top of it!”

Site Supporter
The kids filed into class Monday morning.
They were all very excited.
Their weekend assignment was to sell something, and then give a talk on salesmanship.
Little Sally led off. "I sold Girl Scout cookies & Imade $30," she said proudly, "My sales approach was to appeal to the customer's civil spirit and I credit that approach for my obvious success."
"Very good," said the teacher.
Little Debbie was next. "I sold magazines," she said, "I made $45 and I explained to everyone that magazines would keep them up on current events."
"Very good, Debbie," said the teacher.
Eventually, it was Little Johnny's turn. The teacher held her breath.
Little Johnny walked to the front of the classroom & dumped a box full of cash on the teacher's desk.
"$2,467," he said
"$2,467!" cried the teacher, "What in the world were you selling?"
"Toothbrushes," said Little Johnny.
"Toothbrushes!" echoed the teacher, "How you possibly sell enough tooth brushes to make that much money?"
"I found the busiest corner in town," said Little Johnny, "I set up a Dip & Chip stand & I gave everybody who walked by a free sample."
They all said the same thing, "Hey, this tastes like dog poop!"
Then I would say, "It is dog poop. Wanna buy a toothbrush? I used the President Obama method of giving you some crap, dressing it up so it looks good, telling you it's free and then making you pay to get the bad taste out of your mouth."
Little Johnny got five stars for his assignment.

Staff member
LITTLE JOHNNY IS BACK:

The teacher asked the class to use the word “fascinate” in a sentence.

Molly put up her hand and said, “My family went to my granddad's farm, and we all saw his pet sheep. It was fascinating."

The teacher said, “That was good, but I wanted you to use the word ‘fascinate,’ not 'fascinating'.”

Sally raised her hand. She said, “My family went to see Rock City and I was fascinated.”

The teacher said, “Well, that was good Sally, but I wanted you to use the word ‘fascinate’.”

Little Johnny raised his hand, but the teacher hesitated because she had been burned by Little Johnny before. She finally decided there was no way he could damage the word “fascinate,” so she called on him.

Johnny said, “My aunt Carolyn has a sweater with ten buttons, but her tits are so big she can only fasten eight!”

The teacher sat down and cried.

Staff member
The pretty teacher was concerned with one of her eleven-year-old students. Taking him aside after class one day, she asked, "Little Johnny, why has your school work been so poor lately?"

Holding back an urge to smile, she asked, "With whom?"

"But Johnny," she said gently, "don't you see how silly that is? It's true that I would like a husband of my own someday. But I don't want a child."

GOLD Site Supporter
Little Johnny was in church with his mom for Sunday Mass when he felt a sudden barf attack impending. "Mom, I think I'm going to throw up!" She told him, "I want you to run outside as fast as you can. Run across the lawn and go behind the bushes. You can throw up behind the bushes and nobody will see you." So Little Johnny hauled ass for the door. Less than a minute later, he returned to his seat next to his mom. He had the look of obvious relief on his young face. "Did you make it all the way to the bushes, Johnny?"

"I didn't have to go that far, mom. Just as I got to the front door, I found a box that had a sign on it: FOR THE SICK." 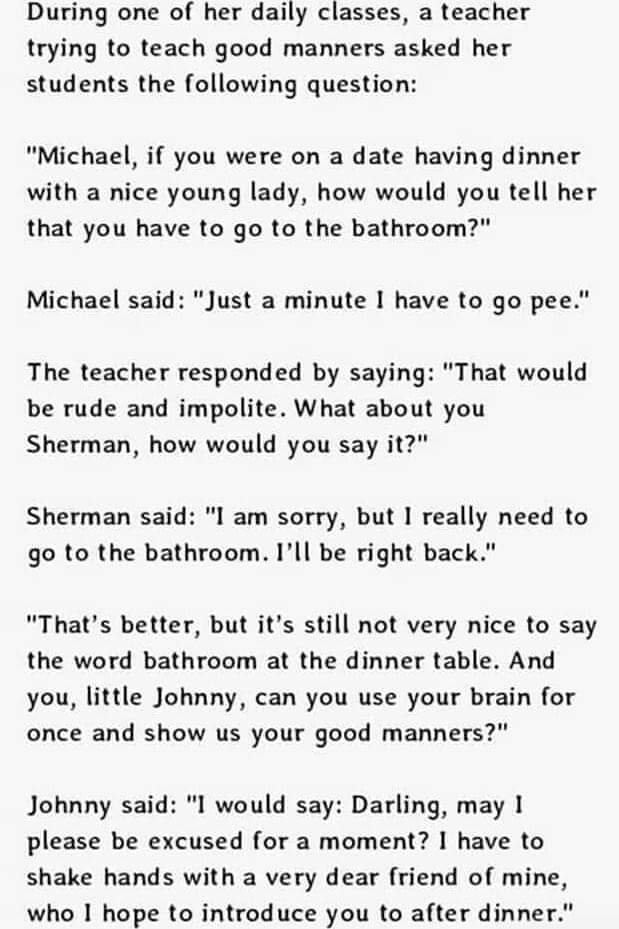 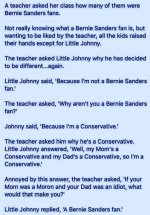 I posted this onto another forum that I frequent.

" That is liberal indoctrination in our school system today. Shameful."

Staff member
Little Johnny is at it again ....

A boy is selling fish on a corner. To get his customers' attention, he is yelling, "Dam fish for sale! Get your dam fish here!" A pastor hears this and asks, "Why are you calling them 'dam fish.'" The boy responds, "Because I caught these fish at the local dam." The pastor buys a couple fish, takes them home to his wife, and asks her to cook the dam fish. The wife responds surprised, "I didn't know it was acceptable for a preacher to speak that way." He explains to her why they are dam fish. Later at the dinner table, he asks his son to pass the dam fish. He responds, "That's the spirit, Dad! Now pass the f*cking potatoes!" 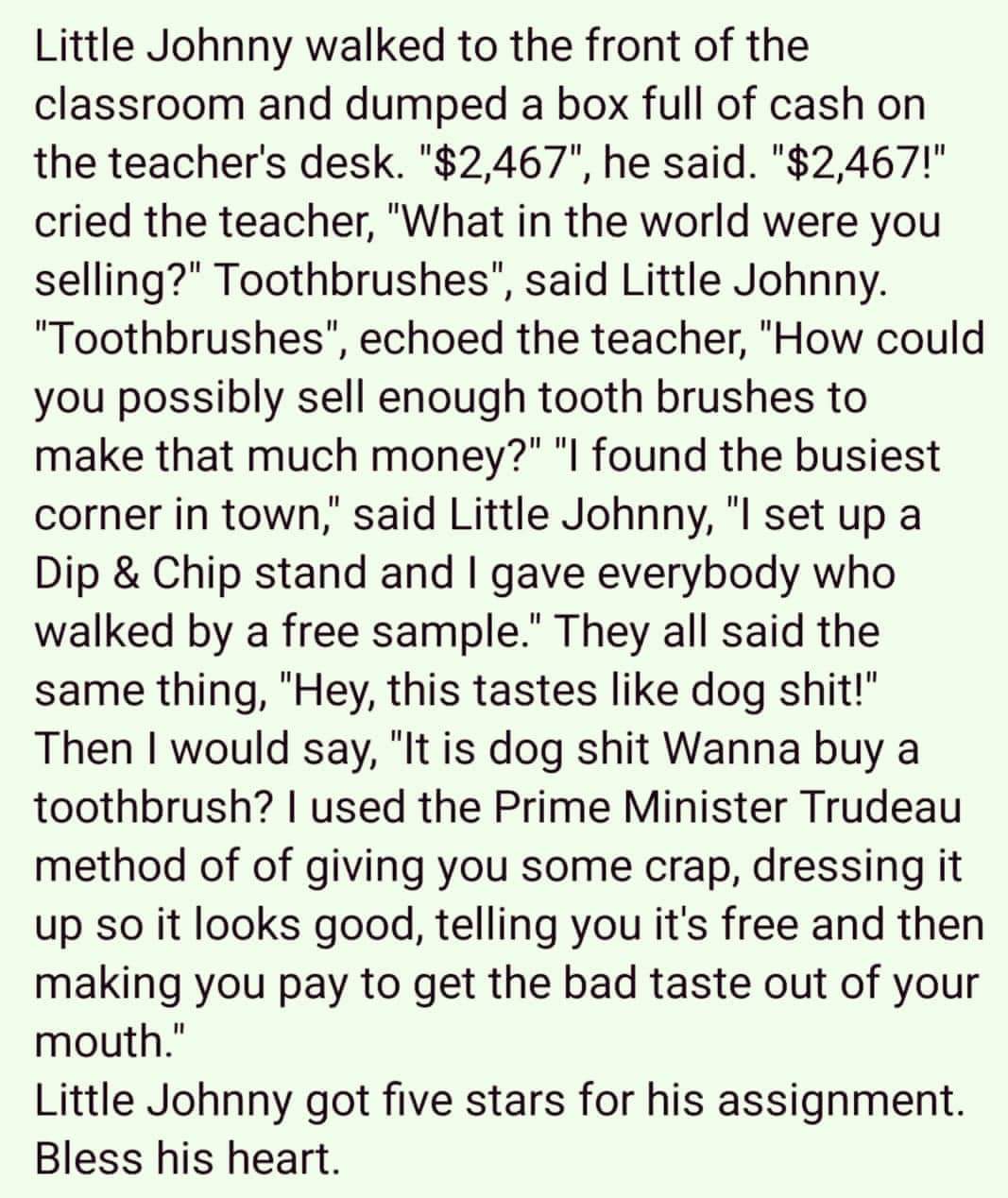