Staff member
GOLD Site Supporter
Subway restaurants are typically small town, locally owned, locally operated, and generally service a working class customer base. So who does Subway pick to be their spokesperson? None other than the rabidly anti-American woke captain of the US women's soccer team. Customers are pissed. Franchise owners are pissed. It was all so predictable.

Now there is a push to get her fired. My question is why would they have hired her in the first place? 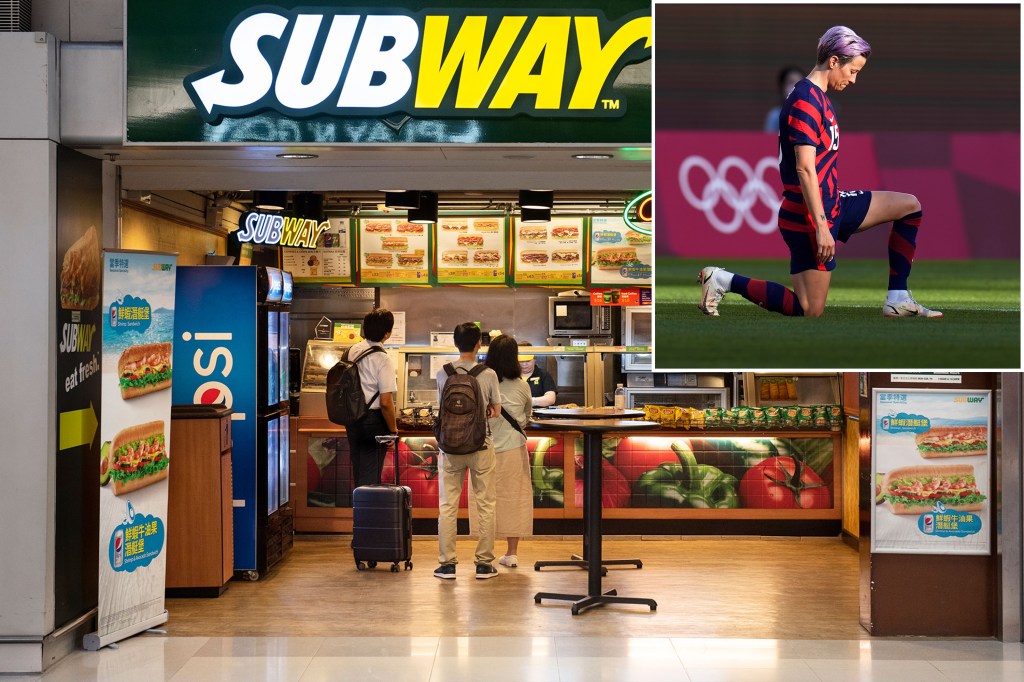 Subway franchisees are fed up with Megan Rapinoe’s TV ads

Megan Rapinoe kicked up another round of controversy at the Tokyo Olympics — and now a group of Subway franchisees are pressuring the fast-food giant to give her the boot. The 36-year-old, pu…


Subway franchisees are fed up with Megan Rapinoe’s TV ads​

​
Megan Rapinoe kicked up another round of controversy at the Tokyo Olympics — and now a group of Subway franchisees are pressuring the fast-food giant to give her the boot.​
​
The 36-year-old, purple-haired soccer star — who kneeled during the National Anthem to kick off the Tokyo Olympics before leading the United States to a bronze medal this week — began a stint as a pitchwoman for the fast-food giant this spring.​
​
In one spot, Rapinoe — who has been a vocal proponent of equal rights and equal pay for women — knocks a burrito out of a guy’s hands by kicking a soccer ball at him.​
​
The response has been mixed, according to franchisees. Late last month on a discussion forum hosted by the North American Association of Subway Franchisees, a Wisconsin store operator posted a picture of a hand-scrawled note from an irate customer taped to the front door of his shop.​
​
“Boycott Subway until Subway fires the anti-American … Megan Rapinoe, the creep who kneels for our beloved National Anthem!” the note read.​
​
“The ad should be pulled and done with,” the franchisee wrote of the Rapinoe spot. “It gets tiring apologizing.”​
​
Subway doesn’t own any of its nearly 22,000 locations, but it charges franchisees 4.5 percent of their revenue for a national advertising fund and controls how the money is spent. Now, many store operators — particularly those in red states — say they’re facing a harsh backlash from the parent company’s decisions.​
​
Last week, reps from the NAASF told members the group had already taken grievances over the Rapinoe ads to the company’s top management, led by Chief Executive John Chidsey.​
​
“Your NAASF Board has already communicated with [Subway] leadership the concerns voiced by NAASF membership,” the group’s executive director, Illya Berecz, told franchisees, according to a letter obtained by The Post.​
​
A hand-scrawled note from an irate customer that one Wisconsin store operator said was taped to the door of his shop.​
“I had a bunch of franchisees calling me on this today,” a lawyer who represents Subway franchisees told The Post earlier this week. “They are trying to get the ads pulled.”​
​
Berecz didn’t respond to requests for comment. Subway also didn’t respond to requests for comment.​
​
“They probably wanted more splashy advertising to go along with more splashy foods,” said John Gordon of Pacific Management Consulting Group, which advises restaurants. “We are so politically divided in this country and Subway should have done more careful due diligence, without a doubt, before choosing [Rapinoe].”​
​
Megan Rapinoe kneels prior to the women’s bronze medal soccer match against Australia at the 2020 Summer Olympics.AP​
One exasperated West Coast franchisee told The Post he believes the company’s ads should focus on the improved bread. The franchisee, who spoke on the condition of anonymity, also suggested that Subway’s ad gurus focus on the chain’s mom-and-pop owners so Subway comes off as less corporate.​
​
“Spending our money to make a political statement is completely and totally out of bounds,” an Arizona franchisee said on the NAASF blog about the corporate parent.​
​
Another Midwest-based franchisee said Subway should have seen this coming before signing Rapinoe. In July 2019, she took heat for allegedly stomping on the American flag. Weeks earlier, she created headlines when she said she was not going to the “f**king White House” if invited to visit President Trump.​
​
Indeed, after this week’s disappointing bronze medal, Trump took a few digs at Rapinoe.​
​
“If our soccer team, headed by a group of Leftist Maniacs, wasn’t woke, they would have won the Gold Medal instead of the Bronze,” Trump said in a statement. “The woman with the purple hair played terribly and spends too much time thinking about Radical Left politics instead of doing her job!”​
​
Rapinoe this year has inked other endorsement deals besides Subway, including a tie-up with Victoria’s Secret in June.​