Staff member
GOLD Site Supporter
Looks like a pretty moth but it is an invasive species that can destroy crops, trees and shrubs. It has been moving westward from the east coast where it was accidentally imported in some shipping containers. Probably in Ohio and possibly southeast Michigan. It is definitely in most of Pennsylvania and it is causing problems. 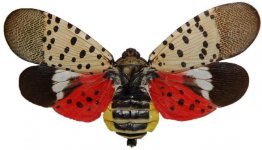 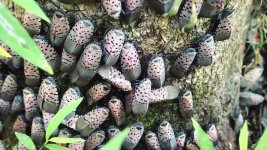 This alert is from the AG dept of Pennsylvania but it is all over the east and moving west. Ohio should be on high alert for this. Ditto SE Michigan.

The spotted lanternfly causes serious damage including oozing sap, wilting, leaf curling and dieback in trees, vines, crops and many other types of plants. In addition to plant damage, when spotted lanternflies feed, they excrete a sugary substance, called honeydew, that encourages the growth of black sooty mold. This mold is harmless to people however it causes damage to plants. In counties infested and quarantined for spotted lanternfly, residents report hundreds of these bad bugs that affect their quality of life and ability to enjoy the outdoors during the spring and summer months. Spotted lanternflies will cover trees, swarm in the air, and their honeydew can coat decks and play equipment.

In addition to damaging trees and affecting quality of life, the spotted lanternfly is a huge threat to Pennsylvania agriculture industry. The economic impact could total in the hundreds of millions of dollars and hundreds of thousands of jobs for those in the grapes, apple, hops, and hardwood industries.

The spotted lanternfly adult is approximately 1" long and 1/2" wide at rest. The forewing is grey with black spots and the wings tips are reticulated black blocks outlined in grey. The hind wings have contrasting patches of red and black with a white band. The legs and head are black; the abdomen is yellow with broad black bands. Immature stages are black with white spots, and develop red patches as they grow.


What happens after you report spotted lanternfly?​

Both the PDA and the U.S. Department of Agriculture (USDA) value all public reports for spotted lanternfly, but they are not able to respond to every report as they receive, on average, more than 1,500 reports a week.

PDA and USDA follow up with all reports of Spotted Lanternfly in Pennsylvania counties that are not quarantined for spotted lanternfly to discover, contain and limit further spread of the invasive insect.

They also use all the reported data from across the Commonwealth to better understand the spread and numbers of the invasive insect, which directly contributes to when and where they treat.
B

Staff member
GOLD Site Supporter
Thanks Bob
I live in one of the infected counties but have yet to see any. Will keep my eye out.

Squash them, cook them, smack them down, just make sure you kill them. Full story at the link below but it appears that these bugs are a serious threat to the upstate NY winemakers and could destroy the vineyards. 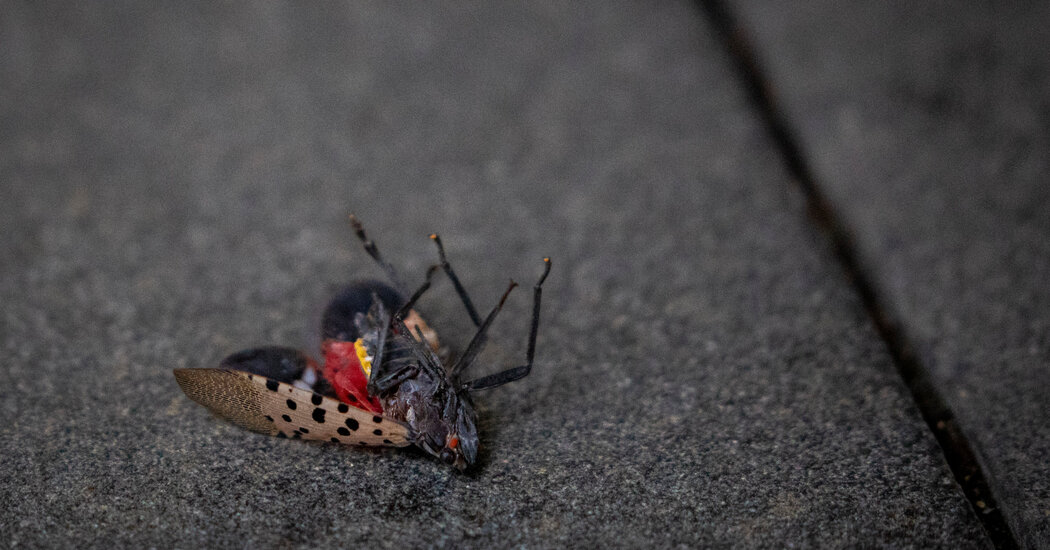 There’s a new natural predator in New York City, and the government wants us to kill it. Can we summon the resolve?

There’s a new natural predator in New York City, and the government wants us to kill it. Can we summon the resolve?​ 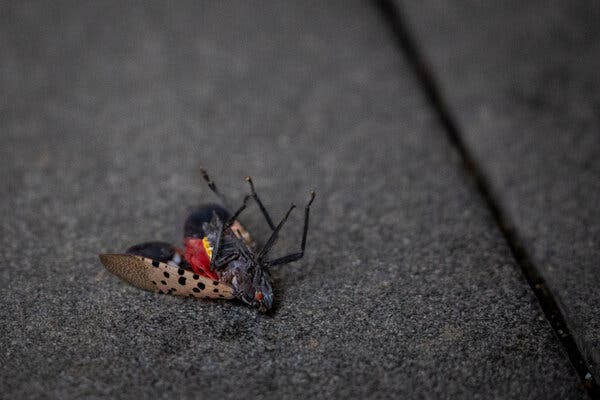 On a recent weekend afternoon, Damian Biollo went to Hudson Yards with his wife to meet up with a drawing group that typically convenes in Central Park, where the mysteries of nature reveal themselves more reliably. On this day, a mall-cum-office park would dubiously provide the inspiration, but not long after they arrived, they noticed something out of context and quite beautiful — a tiny creature with two pairs of wings, the front set a pale gray elegantly dotted in black, and the back set smaller and accented in bright red. It had situated itself near an entrance to the High Line.

Someone without Mr. Biollo’s particular grasp of the moment might have simply begun sketching what looked like a detail of an exquisite Chinoiserie wallpaper, but he knew that he was in the presence of something insidious. After two attempts, he managed to squash it.

A software engineer who follows a lot of naturalists online, Mr. Biollo correctly identified what he was looking at as a spotted lanternfly (Lycorma delicatula), an invasive pest from Asia that arrived in the United States seven years ago and in New York City last year, immediately landing on the Most Wanted list of local environmentalists, who have brought a General Patton-ish energy to the project of expunging it.

“I spent 10 minutes stomping around and looking for them, and I killed eight,” he told me. That day, in a confined area around 34th Street toward 11th Avenue, they were everywhere. Over the course of two hours, he killed 76 — 40 of them in a span of just a few minutes. “I honestly felt like I was in a twisted video game,” he said. “I killed eight and I thought maybe I could get to a high score of 10.”

Mr. Biollo understood that the lanternfly is a problem for many reasons, but mostly because it zealously feeds on the sap of more than 70 plant species, leaving them susceptible to disease and destruction from other natural antagonists, threatening to set back the fight against climate change. In Pennsylvania, the issue is taken so seriously that the state issued a Spotted Lanternfly Order of Quarantine and Treatment, which imposes fines and even potential criminal penalties on anyone who intentionally moves the bug, at any stage of its life, from one sort of location to another via “recreational vehicles, tractors, mowers, grills” as well as “tarps, mobile homes, tile, stone, deck boards” or “fire pits.”

The insects hop and fly only short distances, but they move with ease and reproduce maniacally. “They can hitch a ride on a baseball cap in the back of your car,” Ronnit Bendavid-Val, the director of horticulture at the Brooklyn Botanic Garden, told me. “I can’t think of something they don’t lay their eggs on — cloth, metal, furniture, sides of buildings and of course trees.” There are no natural predators that go after them, no organic pesticides to shut down their operation, so “if you see one, “squish it,” Ms. Bendavid-Val said, “that’s the message.”

Don’t be fooled by the beauty of the spotted lanternfly.Dave Sanders for The New York Times
New York State’s Department of Agriculture, concerned about the lanternfly’s affinity for grapes and all the resulting danger posed to vineyards in the Finger Lakes and on Long Island, would ask you to go beyond combat and perform reconnaissance. It would like you to collect a specimen when you come across one, put it in a bag and freeze it “or put it in a jar with rubbing alcohol or hand sanitizer,” the purpose of which, other than making use of the extra Purell you bought over the past 18 months, is not entirely clear though the goal — death — will be achieved. Once you have made the lanternfly your victim, you are meant to write to the agency providing additional details about your sighting, pointing out the “street address and ZIP code, intersecting roads, landmarks, or GPS coordinates,” according to the website.

You might abide these directives, hunt down this creature, pulverize it and feel like a warrior, but still you would be forced to recognize the insect’s natural gift for metaphor. The spotted lanternfly made its way to New York City in the middle of a pandemic, arriving first in Staten Island, going after our ecological cohabitants. Chief among them turns out to be the Ailanthus altissima, otherwise known as the Tree of Heaven, otherwise known as the tree at the center of the 1943 novel “A Tree Grows in Brooklyn.” Itself aggressive and a symbol of urban resilience, “it grew in boarded-up lots and out of neglected rubbish heaps,” the author Betty Smith wrote. “It was the only tree that grew out of cement.”

Staff member
SUPER Site Supporter
Not sure what's worse, these or the Democrats that flee the liberal states to spread their cancer or these bugs.