Pontoon Princess said:
the thiokol sold for $11,381.50 with buyer fees, if I did the math correctly.

I think that is a good value for the money.

ah, what do I know, I drink orange Kool-aide...

hope the new owner is happy and enjoys his thiokol for years to come.
Click to expand...

yup, that is a LOT of money, transportation and fees, do add even more to the cost, hope the new owner enjoys lots of smiles, mile after mile of trouble free snow catting, otherwise it is a long way to snow shoe out. hopefully, it is a good very well cared for and property serviced machine, with little to no issues.

the only answer to the high cost of getting a snow cat, is for every owner to give their snow cat away. even better, they pay you to take it away.

Pontoon Princess said:
yup, that is a LOT of money, transportation and fees, do add even more to the cost, hope the new owner enjoys lots of smiles, mile after mile of trouble free snow catting, otherwise it is a long way to snow shoe out. hopefully, it is a good very well cared for and property serviced machine, with little to no issues.

the only answer to the high cost of getting a snow cat, is for every owner to give their snow cat away. even better, they pay you to take it away.

sleddogracer said:
it would appear that owning my low mileage 1344 is better than having money in the bank

with interest rates for savings accounts being near zero, at least, you can have some fun and smiles with the money, you might be right!

SUPER Site Supporter
Are any of you willing to say if you’re gonna bid on the Tucker?

RRose said:
Are any of you willing to say if you’re gonna bid on the Tucker?
Click to expand...

lets turn this around and ask, are you bidding?

lets turn this around and ask, are you bidding?

I would love to own that Cat - I will be bidding on it - pretty sure it’s gonna go for more than my budget will allow.

GOLD Site Supporter
given your budget, I strongly believe you will own it, good luck

well, they are the classic design for tucker sno cat.

I kinda decided this morning I was going to pay what ever it takes to own it but i don't "need" it so if one of you guys truly want it and will give it a good home let me know and I will respectfully steep aside. My gut feeling says it will go for around 13 to 16k

I am with you RRose. The '56 443's are the best looking Tuckers built. You get the vertical bar wrap around the corner grill just like the world famous Rock & Roll without the need for an entire continent of snow needed to turn around.

SUPER Site Supporter
I was looking at the pictures of the ‘52 and I don’t see the traditional Tucker Sno-Cat Vin/year/model tag on the dash that you see on all the other Tucker’s. It might have some kinda tag under the wiper motor...... did this style tag not start until later models:

GOLD Site Supporter
hey, "Clyde, the tucker man" I will take this one, and you are welcome Clyde.

the earlier tuckers 1948 through 1953 used a brass VIN tag and it is on this cat, middle of the dash to the right of the speedo, look at the 7th photo of the auction listing, all is correct on this tucker.
Last edited: May 20, 2018

Pontoon Princess said:
hey, "Clyde, the tucker man" I will take this one, and you are welcome Clyde.

the earlier tuckers 1948 through 1953 used a brass VIN tag and it is on this cat, middle of the dash to the right of the speedo, look at the 7th photo of the auction listing, all is correct on this tucker.
Click to expand... 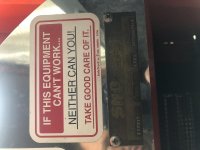 redsqwrl said:
I see there is multiple days between the sales..

the 5 man at jj kane is the best bargain, (different thread), its the C model, perfect if you want a bit more of a working cat. still large roomy and fast, just takes a little more commitment to tow and operate than its lighter sibling the lowly A model.
Click to expand...

Actually, that's not correct. The listing says it's a 1202 B and the literature supports that. The C model has the C6 automatic transmission and the cast aluminum wheels. B models have a four-speed manual and automotive style 5-lug wheels. The A and B models have the instrumentation directly in front of the driver, but the C model moves that panel to the center, and angled toward the driver.

the machine as-sold used is another.

Over the years when replacement parts were ordered from dealers, they got what ever the dealer had in stock at the time.
Part number -________ supersides - _________ is usually how it is entered in the card files.

to me and my limited experience.

A models OC 4 with drop boxes ( chain or gear is a crap shoot)
B models OC 12, 4 Spd or Auto. depends how it was ordered. usually found with the steel two piece wheels.
C models OC 12 Auto cast wheels ( thiokol, DMC, LMC all had a hand in these models)
and Yes the cluster moved around. The C model LMC has the cluster as you describe it.
the C model thiokol parked in the barn has is it in front of the operator.

I feel we as enthusiast give the manufactures of this equipment more credit than they deserve for what is where and when.

I have a C model 3700 that has a allis chalmers engine. the cab clearly states DMC B model.
the decal on the Chassis Tub is LMC.

it has the newer C model two piece axles and again an allis chalmers engine all with larger bearinged Cast wheels.

The Thiokol, DMC, LMC lineage is like the heinz 57 of over the snow machines.... almost like calling a IH scout a 1980 because the head lights are square.

I'm certainly not an expert on the Thiokol/DMC/LMC line up but my experience is similar to what redsqwrl describes. I bought a 1976 Thiokol 1202C from the LMC sales guy at the time. The data plate said it was a 1202ST which I have seen the ST badge on one other 1200 series but don't know what it means. It had the crew cab, 300 cid ford, c-6 auto, oc-12 rear end with the drop axels, aluminum front wheels and the two piece steel wheels on the other 4 axels, J style track grousers, instruments in front of the driver and a six way blade. Was represented as a one owner machine purchased by Burlington Northern.

My friend had a 1977 Thiokol 1202 that had a wider upper cab, no drop axels and the instruments in the center of the engine cowl but was otherwise the same as mine. Originally owned by Alaska DOT and was sold at auction with the rear end disassembled and needing rebuild. He rebuilt the rear end and it trashed its self right away. He rebuilt the rear end again and sold to a lady and it has sat unused ever since. One of the factory guys I used to talk to said that rear end in that machine had always been a problem or was junk as he put it.


I also had a Thiokol 3700AC hydromaster that was a mid seventies but even the factory wasn't sure exactly when it was built. It had a mixture of small Axel diameter thin webbed aluminum wheels and some thicker large Axel wheels and then some even thicker large Axel aluminum wheels. I bought two new wheels from the LMC factory shortly before they closed the doors and those wheels had very thick webbing and a thickened casting around the bearings.

I have personally seen a few 3700AC, DMC 3700 and one 3700LMC plus many pictures of all the different models and almost all of them have some slight difference among them.

I had parts manuals and quite a few brochures of both 1200s and 3700s and there were many options including engines, axels, rear ends, accessories etc. plus lots of frame and track changes over the years. Very difficult for me to positively identify an exact model at first glance.
B

You guys bring up an interesting point. In hindsight we look at brochures and production machines and tend to assume everything went according to Hoyle; that the machines that left the factory left with options and equipment that matched up with the sales literature at the time.

But I think the reality is as you two have pointed out. There aren't clear delineations between machines as they left the factory. Production changes also don't line up with year models. Changes were introduced on an as-needed basis, and existing parts inventory was used up as well. Machines made during a transition had a mix of "old" and "new" components.

And, in companies like Thiokol (and Tucker), a customer could probably special order something not listed in the brochure at all.