GOLD Site Supporter
I am taking Lyndon's idea regarding Rock and Roll and expanding it to open a thread about the 1957-58 Trans Antarctic Expedition (TAE). Those who attended the first Cat's Meow were able to witness Rock and Roll, one of four Tucker Sno-Cats. It was driven by Sir Vivian Fuchs, the organizer and leader of the expedition which made the first crossing of Antarctica.

This photo is of Sno-Cats Able and County of Kent extricating Rock and roll from one of the many snow bridge collapses. Able was driven by David Pratt and Kent by Roy Homard

GOLD Site Supporter
Here are a couple more TAE photos. The black and white is loading Rock and Roll on board for the trip home after the crossing. Crevasse collapse was a common problem. Photos curtesy of Peter Fuchs.

GOLD Site Supporter
I like to ride in a snow track but don't think I would like to ride on top of it onto a ship.... that could be pushing it a bit..

The Trans-Antarctic Expedition, led by Sir Vivian Fuchs and supported by Sir Edmund Hillary.
The portraits of the Explorers.

More photos
The Massey Ferguson Tractor TAE 20
The damaged rear side, probably from the crevasse Fields

The picture of (haywire) door code "C" was taken in London after the TAE was completed and then it toured the country with members of the TAE team giving talks and explaining what happened during the crossing. The flag on haywire in this picture is an orange coloured windsock with the BP logo on it.

The attached B&W photos were taken in Northern Norway during the late springtime of 1956. The three new 743 Sno-Cats together with the “Crossing Team” spent some time in Norway for training and for BP to test some of their fuels and lubricants in Antarctic like conditions. The performance of oil and grease in extreme sub-zero temperatures and fuel consumption at altitude was assessed and when the TAE team returned to England, modifications where carried out on the vehicles and calculations made on the supplies, spares etc. for the expedition to cross Antarctica. 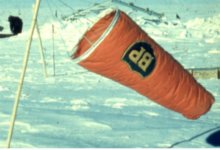 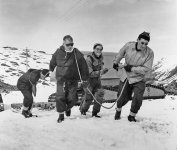 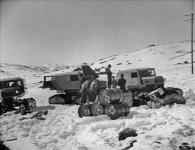 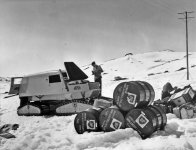 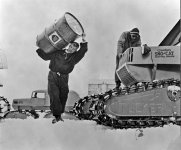 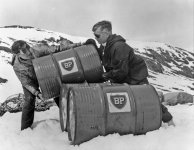 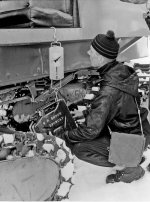 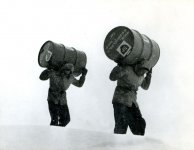 GOLD Site Supporter
That's one hell of a first post!

The Stories (all the guest of information) Behind the STORY.

GOLD Site Supporter
lack of spreader bars caused damage .they must have been hard to use.

JimVT said:
lack of spreader bars caused damage .they must have been hard to use.
Click to expand...

what do you mean by this . can you please explain ?

GOLD Site Supporter
On the way south they used spreader bars to keep the hoisting straps from making contact with the sides of the Sno-Cat's. Once the job was done, they didn't care how they got lifted. They just hooked on to the lift points & moved them. Every one of them have strap damage from the return trip. Though some have been recently repaired.

GOLD Site Supporter
Here is the story of County of Kent's last trip http://bobmckerrow.blogspot.com/2010/08/four-new-zealanders-have-died-in.html As noted above by Mr. Net, the Tucker pictured in this article is Able.

Here is what County of Kent looked like after Lt. Couzens dropped her into the 100' crevasse.

Second photo is how she looked when she arrived in Antarctica in Jan 1956. This crate was home to eight who were left to build the winter over building for the crossing party which came down the following year. Note the PTO winch mounted at he rear of the cat, visible in both photos.

GOLD Site Supporter
County of Kent, in the crate

Pontoon Princess said:
County of Kent, in the crate
Click to expand...

Thanks Ms. Princess for opening the photo for me. For good reading see Eight men in a crate.

JimVT said:
lack of spreader bars caused damage .they must have been hard to use.
Click to expand...

The lifting loops at four places on the Tuckers were welded on at the end of the trip for lifting the cats onto the ship for the trip home. All the cats had the same crushing to the air ducts on the front side panels after the crossing. The spreaders helped some, mostly in the back.

VERY observant! I had assumed those were always there from the factory, but obviously not when you look at most of the pictures above.

sno-drifter said:
The lifting loops at four places on the Tuckers were welded on at the end of the trip for lifting the cats onto the ship for the trip home. All the cats had the same crushing to the air ducts on the front side panels after the crossing. The spreaders helped some, mostly in the back.
Click to expand...

GOLD Site Supporter
A question for the TAE experts- County of Kent and "Rose" (shown below) from a later expedition had a very large 'box' on the left hand front hood cowl. This is only on the freighters w/ passenger accommodations. (See very first picture for reference). What got stuck in this box??

Also, Sno-Cat Able continued to put in a hard life on the ice for the New Zealand Antarctic Research Project at Scott Base after the TAE was complete. Would it be appropriate for those pics to go here, or a separate thread? Found a lot of old pics from a NZ digital storage site. That cat had a hard life!

I just want some of the grousers off it

GOLD Site Supporter
Thanks for the photos DAVENET. The "Posing photo is Sno-Cat Able. The second is County of Kent with Rose painted on the door. You with the super powers of the interweb should be able to read the sign across the top of Kent to read "County of Kent". The lump on the left side is a gas fired engine heater. There is one on Haywire but not ugly as this one. Remember that Kent went to the ice a year before the other three and cold weather mods were done rather hurried and not as refined.

I vote to keep the future posts from the NZ Antarctic activities on this thread.

GOLD Site Supporter
When they renamed it "Rose" they must have repainted the sign up top as well. Can't make out what it says, but definitely different than the County of Kent stenciling below

Gone But Not Forgotten

DAVENET said:
When they renamed it "Rose" they must have repainted the sign up top as well. Can't make out what it says, but definitely different than the County of Kent stenciling below
Click to expand...

The first word appears to be "THE" the second word starts with SW maybe sweet?

GOLD Site Supporter
Some pics from the NZ work after the TAE:

Note the slack in the tracks