On Wednesday at 2:18 p.m. EDT almost all the cell phones in the country will go off in the first nationwide test of a wireless emergency alert system.

FEMA officials say they expect the alert to reach 75 percent of wireless-enabled devices, including cell phones and smartwatches. The alert will not interrupt a phone call or an active data session, though FEMA and the FTC are working to make sure the information reaches more people.

And even if cell phone users have opted out of other emergency alerts for imminent weather threats or AMBER alerts they should still receive the national-level alert, which is meant to be used in the case of national threats like a nuclear attack or terrorist attacks in multiple cities.

Despite being called a "Presidential Level Alert" emergency messages sent through the system won't be written by Donald Trump or any other president. Emergency messages are pre-written and approved by various government agencies in advance of any test or emergency.

The message Wednesday will read "Presidential Alert: This is a test of the National Wireless Emergency Alert System. No action is needed."

About two minutes after the wireless emergency alert, the broadcast system will send a similar message through radio and television stations.

GOLD Site Supporter
It scared the crap out of me.
Lol

I knew it was scheduled.
Forgot about it. 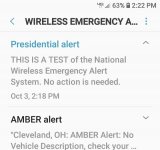 Staff member
GOLD Site Supporter
I was in my office. 2 land lines and 1 cell phone. TV was on.
Only alert received was on the TV.

bczoom said:
I was in my office. 2 land lines and 1 cell phone. TV was on.
Only alert received was on the TV.
Click to expand...

GOLD Site Supporter
Everyone's phone here worked but mine. I guess I was on the schedule to be couned amoung the dead when the disaster was over. 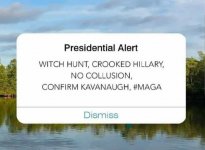 That’s it in a nutshell! :th_lmao:

GOLD Site Supporter
Yeah we got the alert on both of our iPhones. Just hit the power button once, no more annoying tone. Same with the TV as soon as the alert came on, just hit mute.
M

SUPER Site Supporter
Missed all the excitement. Phones, TV, electronic gizmos inside. TR outside working on a beautiful fall day. Just me and my power tools. The way it should be.

jim slagle said:
That’s it in a nutshell! :th_lmao:
Click to expand...

Lol yes
There are lots of them floating around now.
For example--- 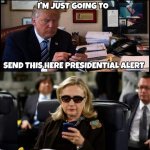 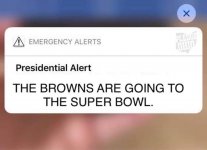 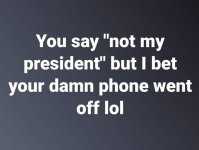 Staff member
I was golfing today and was in the clubhouse when I got the alert. It just vibrated since I had the sound turned off. Sure glad I was not putting at 2:18.