Bought a place in town
Moved from our mountain cabin

Quite the adventure for a couple ol' geezers
Yes, we did all the moving
No help
No need

Rather shocked at how much fixers go for, after living at the cabin for almost six years 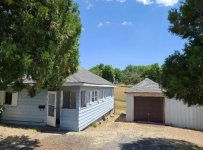 Oh, and our back door neighbors are rotted souls in a pioneer cemetery

When we first saw the place, I thought it was a par five hole of a golf course
Heh, talk about slow play.... 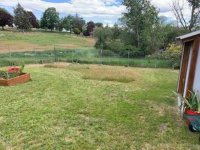 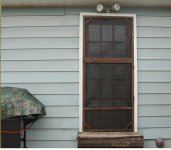 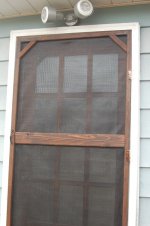 They're always a fun build

The back yard is a lush carpet....of weeds
Green weeds in early spring
Brown weeds in summer
I hate mowing
So, I don't water
One day it'll all be garden anyway 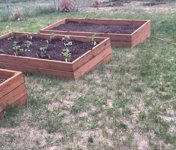 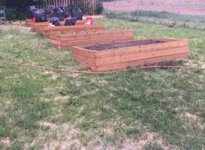 The beds are quite productive 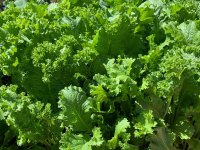 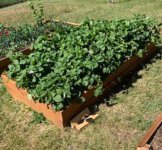 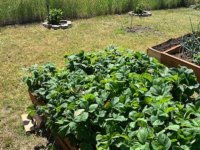 Next was a garden shed, since I turned the garage into a shop 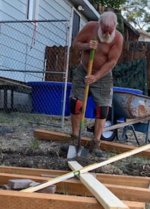 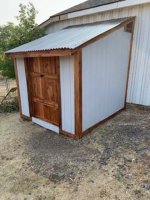 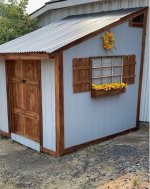 Noticed a lot of town deer 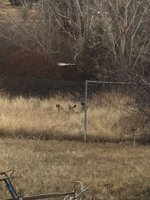 This was the summer of 'paint the place'

I'm not unhappy with it 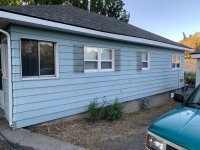 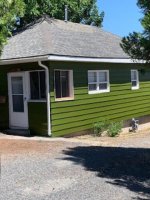 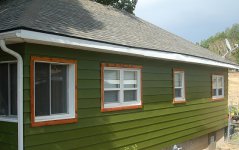 Just finished up the cedar doors for the shop
Still have the roll up, but wanted one with a bit more eye appeal
We'll see how winter makes 'em swell and contract 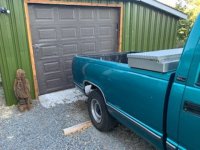 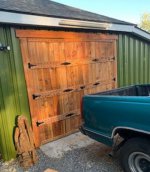 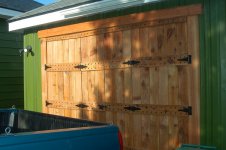 Quite pleased with how the garden shed looks in green 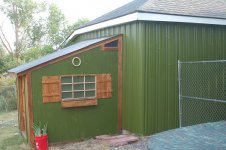 GOLD Site Supporter
Question: Out of curiosity, when you decided to move back on grid from the mountain, was it the fires, too hard or something else.

m1west said:
Question: Out of curiosity, when you decided to move back on grid from the mountain, was it the fires, too hard or something else.
Click to expand...

Fires
Were a strong consideration
There were two pretty close ones, that if the winds were wrong, we'd no longer have our cabins and shop
or trees
or undergrowth
The undergrowth up there was critical
Without it, you pretty much have a dust (pumice from mt Mazama) bowl
Some folks, approx three miles from our place, meticulously removed all the undergrowth
Making it a 'park like setting'
Wasn't long before many dump beds of gravel trucks were making their way to their place
They thought a grass lawn would be nice
The sod does not survive for long up there
Heh, townies

But, yeah, fires
Even if they weren't all that near or threatening, the smoke 24/7 for days/weeks was suffocating


Hard living
I most enjoyed that the first couple years
A bit of a challenge
Long term, the chores became redundant
Hauling water is steady
and...heavy
Chopping wood was my workout
The 14 cord attested to that 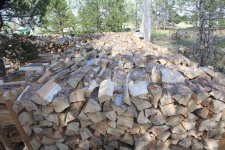 I do miss that

But, after almost six years, it no longer was a challenge
Especially after building the cabins and shop
One can only take so many photos of 'the pretty snow'....for nine months of the year

Something Else
My wife's hernia and driving the 50 miles at 80mph around midnight, during deer migration, became a consideration

Yeah, there were times
But we knew that goin' in 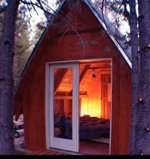 The renegade 30 something off gridders were somewhat in awe

I think, overall, it was no longer a challenge

I do miss it from time to time

Heh, last week my son advised me a bear got into the trash can shed
Did the usual, tear things up
Strew it all around
amble off

Built the trash can shed to keep bears out
....actually to just slow them down a bit
(Nothing keeps bears out, nothing) 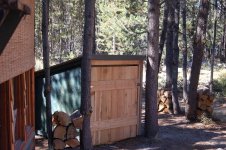 While I was playing away in the shop, my lady was canning
aaaand, made a plate of dried kale

Heh, this stuff is NOT filling
Much like eating cotton candy
'cept it tastes a whole bunch like bacon!

Dried Kale
a bit of oil ('rub all over the leaves)
put on a cookie sheet
sprinkle salt, pepper, garlic
and parmesan cheese
in oven at 170°F 'til crunchy' (approx an hour or so) 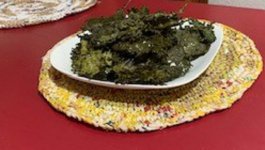