Staff member
GOLD Site Supporter
Looks like a smattering of pro-oil Democrats and the new GOP majority are enough to override a potential OBAMA veto. Now if the GOP gets its shit together, introducing, and passing authorization of the Keystone XL pipeline should be a fast process and could really help get this floundering economy back on its feet while building public confidence. They need 67 votes to be VETO PROOF, and currently NOT ENOUGH Democrats are signed on, but I suspect that may change as political reality sets in.

Republican gains in the Senate have given Keystone XL supporters a filibuster-proof majority to pass a bill approving construction of the controversial pipeline.

Before Tuesday’s election, supporters had 57 votes in the Senate in support of Keystone, including a dozen Democrats. After Republicans picked up seven Senate seats (and counting) in Tuesday's election, the vote count for Keystone had ballooned to 61.
GOP Sen.-elects Mike Rounds (S.D.), Shelley Moore Capito (W.Va.) Cory Garnder (Colo.) and Joni Ernst (Iowa) are all Keystone backers.
"The election of several pro-Keystone Senators puts the passage of Keystone that much closer and shows energy projects like Keystone is a priority for our country," Ryan Bernstein, Sen. John Hoeven's (R-N.D.) chief of staff, told The Hill on Wednesday.

"We will be working with Senator [Mitch] McConnell (R-Ky.) to get a vote on the floor shortly after the new Congress is seated," Bernstein added.

A Republican Senate could pass a clean Keystone bill outright, or tether approval of the oil sands pipeline to a must-pass spending bill or broader energy package. The latter would make it harder for President Obama to veto the pipeline.

Republicans wouldn't appear to have a veto-proof majority if Obama rejects the pipeline.

But they are getting close to 67 votes, suggesting that if they can woo a few more Democrats to their side, such as Sens. Tom Carper (Del.), Chris Coons (Del.) or Bill Nelson (Fla.), they could get there.

Republicans believe that in his final two years in office, Obama might just approve Keystone if a bill hits his desk.

“I actually think the president will sign the bill on the Keystone pipeline because I think the pressure — he’s going to be boxed in on that, and I think it’s going to happen,” Republican National Committee Chairman Reince Priebus said Tuesday on MSNBC’s “Daily Rundown.”

Obama has been under significant pressure from green groups to reject the pipeline, and there have been repeated executive delays that have put off a final decision.

Given GOP gains in the Senate, environmental groups opposed to the pipeline say they will step up their efforrts even more.

“If Obama approves the pipeline it would be a real blow to his legacy on climate, he has a lot to lose in terms of his outgoing reputation,” said Jamie Henn of 350.org. "We are itching to get back in the fight.”
Click to expand...

I hope they get er done! And it would piss off the greenies.

GOLD Site Supporter
Speaking of greenies, the new senate needs to reign in the epa - cut their funding.

waybomb said:
Speaking of greenies, the new senate needs to reign in the epa - cut their funding.
Click to expand...

GOLD Site Supporter
I know we're all high on this recent victory but sooner or later you're going to come back down to earth and realize that politics are king. This group is no different than the last group, nor the group before them. Yes, there may be a few changes, just for window dressing if you will, but real change? Nope, I doubt we'll see any of that.

Let's see this group limit the executive power of the president and install term limits on congress. End the spying on American Citizens and reign in spending and the ever increasing size of the federal government. Bring an end to insider trading practices that congress enjoys but we would go to jail for. Bring an end to QE before it completely devalues our dollar and subsequently wipes out our life savings and enslaves our children. Or how about ending the practice of exempt themselves from the laws that they pass but require us to abide by?

Want me to go on?

GOLD Site Supporter
You're absolutely correct. If they're not corrupt when they get there, it won't take long for them to be converted by the old guard and the RINO's. None of them can be trusted, because MOST of them are first and foremost....LAWYERS!

squerly said:
I know we're all high on this recent victory but sooner or later you're going to come back down to earth and realize that politics are king. This group is no different than the last group, nor the group before them. Yes, there may be a few changes, just for window dressing if you will, but real change? Nope, I doubt we'll see any of that.
Click to expand... 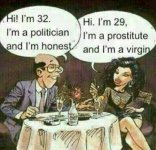