GOLD Site Supporter
Hi all, I just made a deal on this old 1936 Caterpillar RD4. Not running of coarse, its one of the first diesel Cats. If it was a R4 it would be gas, the RD means diesel then the R was dropped later as they were all diesel moving forward. The seller stated that he had it running 4 years 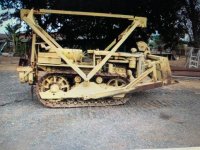 ago by pull starting it, as the pony motor has no spark, then the fan belt broke, he broke his leg and never played with it after that. I checked it out. Its is all there with the hour meter showing 800 hours, everything turns and all the levers move and no water in anything. I will have it home later this week and will post more pictures with a lot of questions if any of you have experience with these old machines it would be a great help.
You must log in or register to reply here.
Share:
Facebook Twitter Reddit Pinterest Tumblr WhatsApp Email Share Link
Top