I have a 2815 HST I purchased it about a week ago . Someone had tried to steal it they busted the dash ,ignition and a few other things. Mainly the loader control had been tampered with . The L shaped rocker plate was loose and the outer ball stud was almost falling out of the hole . I took it apart and I cannot get it back together. I looked up the pic online and its a terrible image . Its hard to see what hole the stationary ball goes in and what is the orientation of the plate and bracket. It looks like plate is shaped like a L and has a long end and a short end . When I put the plate on the balls and look down the center of the bracket hole in one orientation the disc and center handle threads are in the center ., other orientation its either to the left or right .Does the round disc go into the round hole of the bracket?? I need a picture of how the plate goes on the balls and weather the bracket goes open side forward or backward .. . These also a disc that I think pops into the round hole in the bracket . I have tried multiple time to get the bracket ,plate , disc, all together with no luck when I do get it close its in a major bind . I tried to copy lint to the pic on website but no luck Its located on the Mahuindra website under attachments / KMW-ML111 2815-3316 SERIAL # 084847521 Its a ML111 loader If someone can send me a pic of the loader control without the boot on that would hopefully tell me what I'm doing wrong . Thank you anyone out there that can help me Eric

Staff member
I looked and found info on your tractor on tractor data. But no specifics like you are digging for. Dang it.

Staff member
SUPER Site Supporter
This is for the ML106 loader from a 2615 series. I suspect it may be close but maybe not. 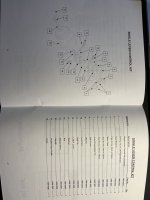 Mahindra918 said:
This is the only pic I have before it was taken apart and I think it’s backwards because the bucket was moving opposite
Click to expand...