Big Tech censorship is why you do not here of this. All out full court press to suppress the election fraud our country witnessed in last November's election of the criminals Joe Biden and family.
No one can report on this and speak normally or they are banned from most internet outlets, unless under some new media being managed by Republicans.
Maricopa Co. appears to finally agree to letting some one look at the internet routers.... But wait were those Dominion machines supposed to be connected to the net???

Dominion had maintained they were not. Obviously they are the liars here, and they need punished severely. Eliminated for ever in our elections would be the proper thing here.

GOLD Site Supporter
Hopefully this can be done in time for the next elections. I doubt that the left will allow it.

If they lose the fight over voter and poll integrity for 2020 elections, they lose it all.

FrancSevin said:
Hopefully this can be done in time for the next elections. I doubt that the left will allow it.

If they lose the fight over voter and poll integrity for 2020 elections, they lose it all.
Click to expand...

Let us pray they loose integrity for several decades after stealing an election. Az elected TWO senators who did not win sh1t....
Big tech is in court defending the indefensible. Our nation should be doing away with big tech in their lives any time they can. Dump Face Book would be a great start along with Twitter and all the other left wing censored sites.
We are winning in the courts, and much more importantly we are winning in the public eye as well. Independent voters are going to give the Democrats the middle finger in the next several elections. Election laws are being reinforced to prevent the absolute travesty of Democratic stealing methods. We now know how they did it, and the several forms of cheating lying stealing rioting looting burning F'ing Democrats used to steal the election from the true President, Donald J. Trump.

Biden should be in a jail cell or a long term care center with bars on the doors and windows, along with most the the DNC party heads.
I want them all put on trial for their crimes against this nation, their crimes against ALL REPUBLICANS, LIBERTARIANS and INDEPENDENTS. Fuc%ers will pay dearly for their misdeeds. 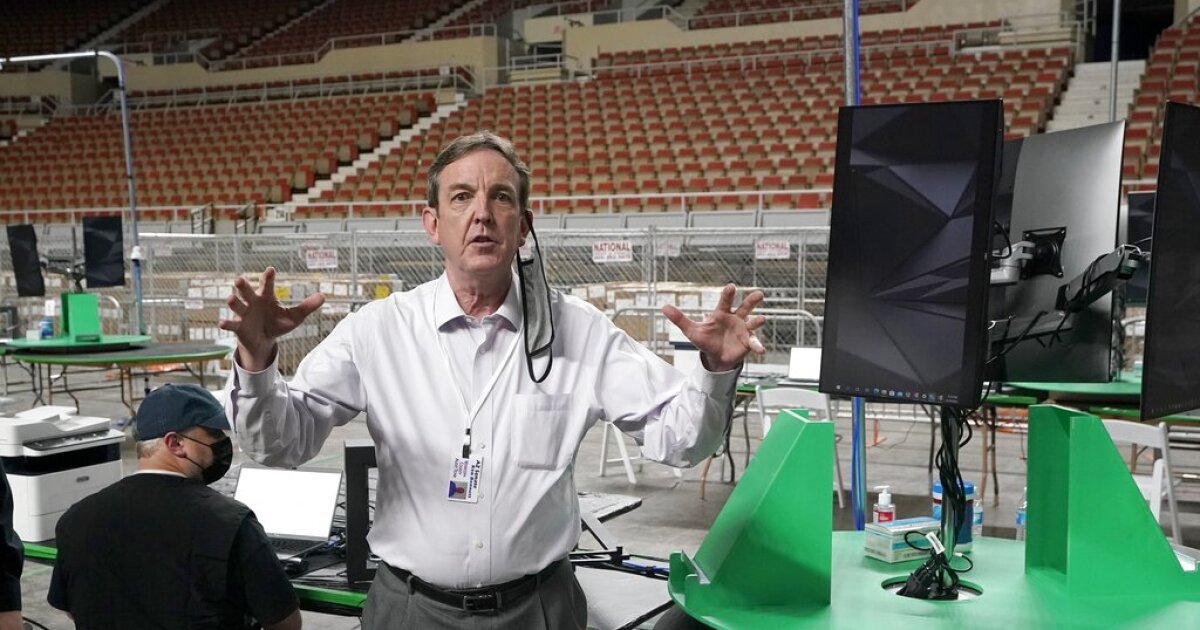 The contractors tasked to audit the 2020 Maricopa County general election are poised to present their findings to the Arizona Senate on Friday, with an offered preview on Wednesday.

| September 22, 2021 09:23 PM​
​
The contractors tasked to audit the 2020 Maricopa County general election are poised to present their findings to the Arizona Senate on Friday , with an offered preview on Wednesday.​
​
Lead Contractor and Cyber Ninjas CEO Doug Logan, CyFIR founder Ben Cotton, and others tasked with the state Senate -commissioned operation will show the results of the review to Senate President Karen Fann and Judiciary Chairman Warren Peterson at 1 p.m. local time Friday, according to a press release.​
​
The much-anticipated results from the audit come after multiple delays and nearly five months since the audit began at Veterans Memorial Coliseum, where volunteers recounted nearly 2.1 million ballots in the county that President Joe Biden won, along with other procedures. The presentation will be livestreamed online and will not include public comment or questions.​
The Senate liaison for the GOP-led audit, former Arizona Secretary of State Ken Bennett , told Real America's Voice on Wednesday that leadership is "vetting" the report ahead of the presentation. He added, "We're not withholding anything," quashing any rumors the Senate would attempt to block certain aspects of the report from the public's view.​
​
MARICOPA COUNTY SUPERVISOR RESIGNING AFTER COMMENTS ON ELECTION AUDIT GO PUBLIC ​
​
Bennett said "an individual" would present on the "ballot signature envelopes" on mail-in ballots cast in the county. He also said Senate audit spokesperson Randy Pullen would present on the third ballot recount conducted during the audit process. Bennett will offer a brief report about criteria "Maricopa County failed to meet and comply with state statutes and procedures," he said.​
Fann has said the audit, criticized by Democratic Secretary of State Katie Hobbs and the mostly-Republican Maricopa County Board of Supervisors, is about restoring confidence in the local election system, as former President Donald Trump and his allies have alleged widespread fraud in Arizona and other key battleground states following the 2020 election.​
​
The audit has drawn much controversy, with critics pointing out that Logan has no prior experience auditing elections, among other accusations of bizarre and unreliable auditing procedures. ​
​
Biden won Arizona by more than 10,000 votes out of more than 3.3 million across the state. His lead of roughly 2 percentage points was due partly to his advantage in Maricopa County, where the Democrat scored nearly 45,000 more votes than Trump.​
​
Federal officials, as well as state and local, have insisted there is no evidence of widespread fraud in the 2020 election. Still, Trump and his allies have claimed the election was stolen and have pushed for copy-cat audits in other states such as Pennsylvania and Georgia.​
​
Maricopa County officials , who largely opposed the Arizona Senate's audit in court until a judge ruled its subpoenas were "legal and enforceable," previously authorized two election machine audits that found no irregularities in the county's 2020 election. There was also a recount of a sample of ballots that did not turn up any problems .​
​
In a 4-1 vote on Sept. 17, the Maricopa County Board of Supervisors said it would establish a "special master" to take questions from contractors who are part of the firms Cyber Ninjas and CyFir. This would provide them with information on the county's routers that the contractors said they needed to finish a comprehensive forensic audit report.​
​
The county's decision on Friday came after Arizona Attorney General Mark Brnovich threatened to withhold funding to the county if they did not agree to comply with subpoenas filed by the state Senate.​

GOLD Site Supporter
This is so simple.......

Honest people have nothing to hide. They welcome any and all comers to see the truth.

Liars hide the truth because it will HARM them personally, legally, and publicly. These are the ass hole Democrats who have fought a totally legal to do election audit on the request of State officials. Tell me what that says about THEM???

The Dems are dirty lying cheating stealing rioting looting burning ass holes who need to get the full measure of the law... We should have started with that witch Hillary Clinton. Had we charged her, found her guilty of breaking a dozen Federal laws, you would not recognize our nation vrs. the absolute shit show put on by the Criminal Biden family and the DNC....

The FBI had Hunters lap top a YEAR before the election, and did nothing, even though there is enough on it to put the Biden family in Federal Prison for their natural lives.... The FBI is corrupt as the Democrats who weaponized our nations fore most law enforcement. Fuckers....

Staff member
GOLD Site Supporter
Looks like the Maricopa audit in Arizona is going to confirm that Biden won.

KJZZ radio published a story about leaked results. It will be interesting to see the final story when it comes out. Full story is at the link below, this is just a portion: 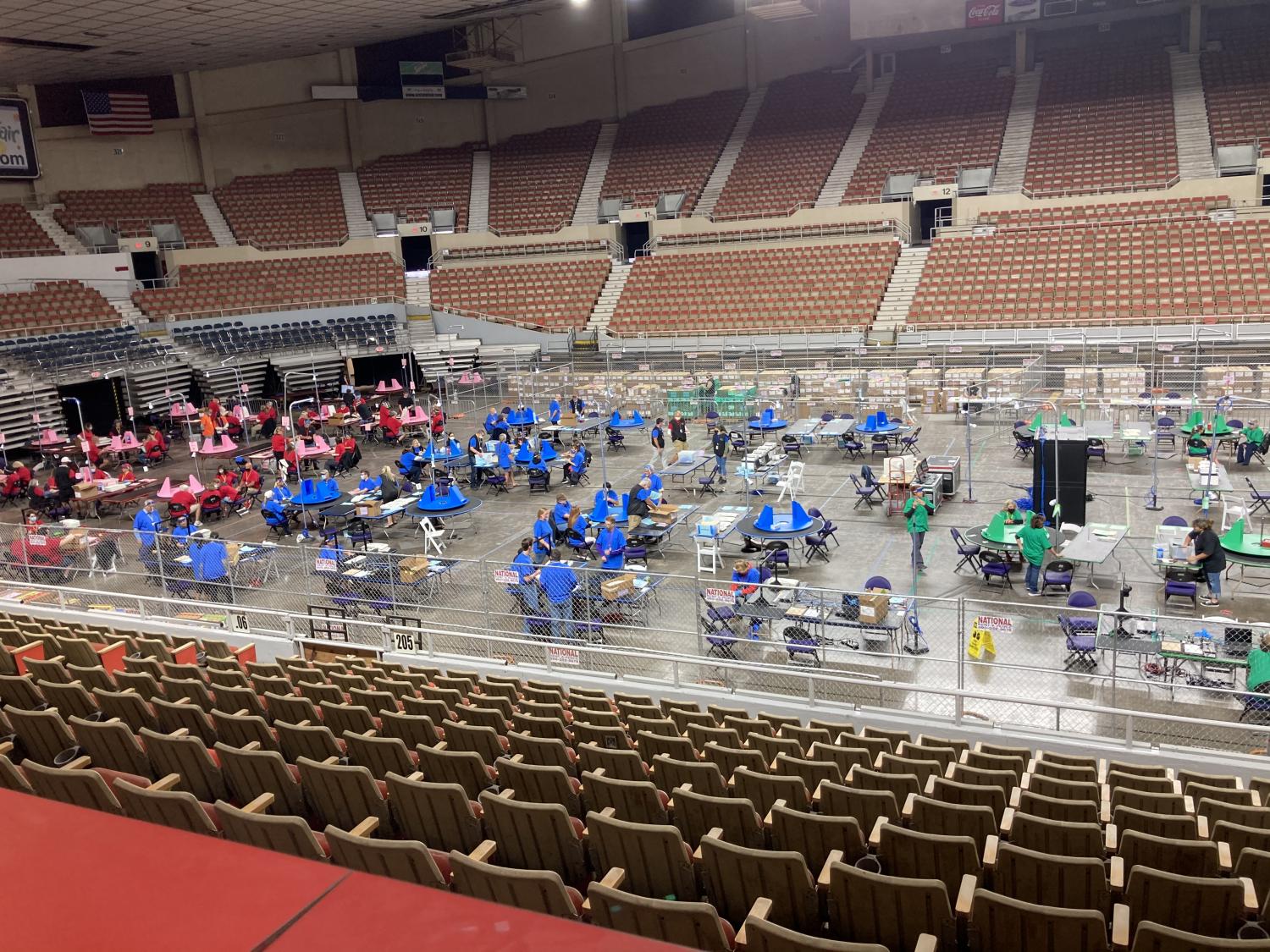 A widely criticized, GOP-led review of the 2020 election in Maricopa County concluded that Joe Biden received more votes for president than Donald Trump.According to a draft copy of the findings obtained by KJZZ, a hand recount of the nearly 2.1 million ballots cast in Maricopa County hewed...

A widely criticized, GOP-led review of the 2020 election in Maricopa County concluded that Joe Biden received more votes for president than Donald Trump.​
​
According to a draft copy of the findings obtained by KJZZ, a hand recount of the nearly 2.1 million ballots cast in Maricopa County hewed closely to the official canvass of the results approved by county leaders.​
​
In fact, the hand recount for Biden exceeded the county’s tally by 99 votes, while Trump received 261 fewer votes than the official results.​
​
Randy Pullen, a spokesman for the election review, confirmed the validity of the draft.​
​
“It’s not the final report, but it’s close,” he said.​
​
The leak comes less than 24 hours before a scheduled presentation in the Arizona Senate, where President Karen Fann and Sen. Warren Petersen, the Republicans who issued subpoenas that obtained the ballots and voting materials needed for the investigation, are giving the contractors they hired to conduct the review a platform to explain their findings.​
​
Trump’s supporters, and even the former president himself, have latched on to the so-called Arizona audit as evidence the election was rigged. Even before the scheduled release of the findings at 1 p.m. Friday, some Republicans have already claimed there’s enough evidence to “decertify” or overturn Trump’s loss in Arizona — a prospect resoundingly dismissed by legal scholars. Others, like GOP gubernatorial candidate Matt Salmon, have called for more investigations of the 2020 vote, and not just in Maricopa County.​
​
But the report itself throws cold water on the grandest claims of fraud.​
​
“What has been found is both encouraging and alarming. On the positive side there were no substantial differences between the hand count of the ballots provided and the official canvass results for the county,” the draft states.​
​
Pullen confirmed that the hand recount was “relatively close” to the official tally.​
​
“Was there massive fraud or anything? It doesn’t look like it,” he added.​
...​
​
Pullen said other reports that will be presented in detail tomorrow have not yet been leaked, and that “anomalies” found in voting records are vast enough to cast doubt on the final vote count — despite the hand recount’s confirmation of the result. ...​
You must log in or register to reply here.
Share:
Facebook Twitter Reddit Pinterest Tumblr WhatsApp Email Share Link
Top