BY TYLER DURDEN
FRIDAY, DEC 25, 2020 - 10:05
Update (1250 ET): Unconfirmed video appears to have captured the moments before and after the Christmas morning explosion in Downtown Nashville.
Right before the explosion, a woman can be heard on a loudspeaker, saying, "all buildings in this area must be evacuated now."
She also said: "If you can hear this message, evacuate now."
After the warning, a loud bang could be heard as the camera was blinded by what appears to be the explosion's bright light.

FULL STORY with lots of photos and video is at the link -->
https://www.zerohedge.com/markets/powerful-explosion-rocks-downtown-nashville

Full story is at the link below: 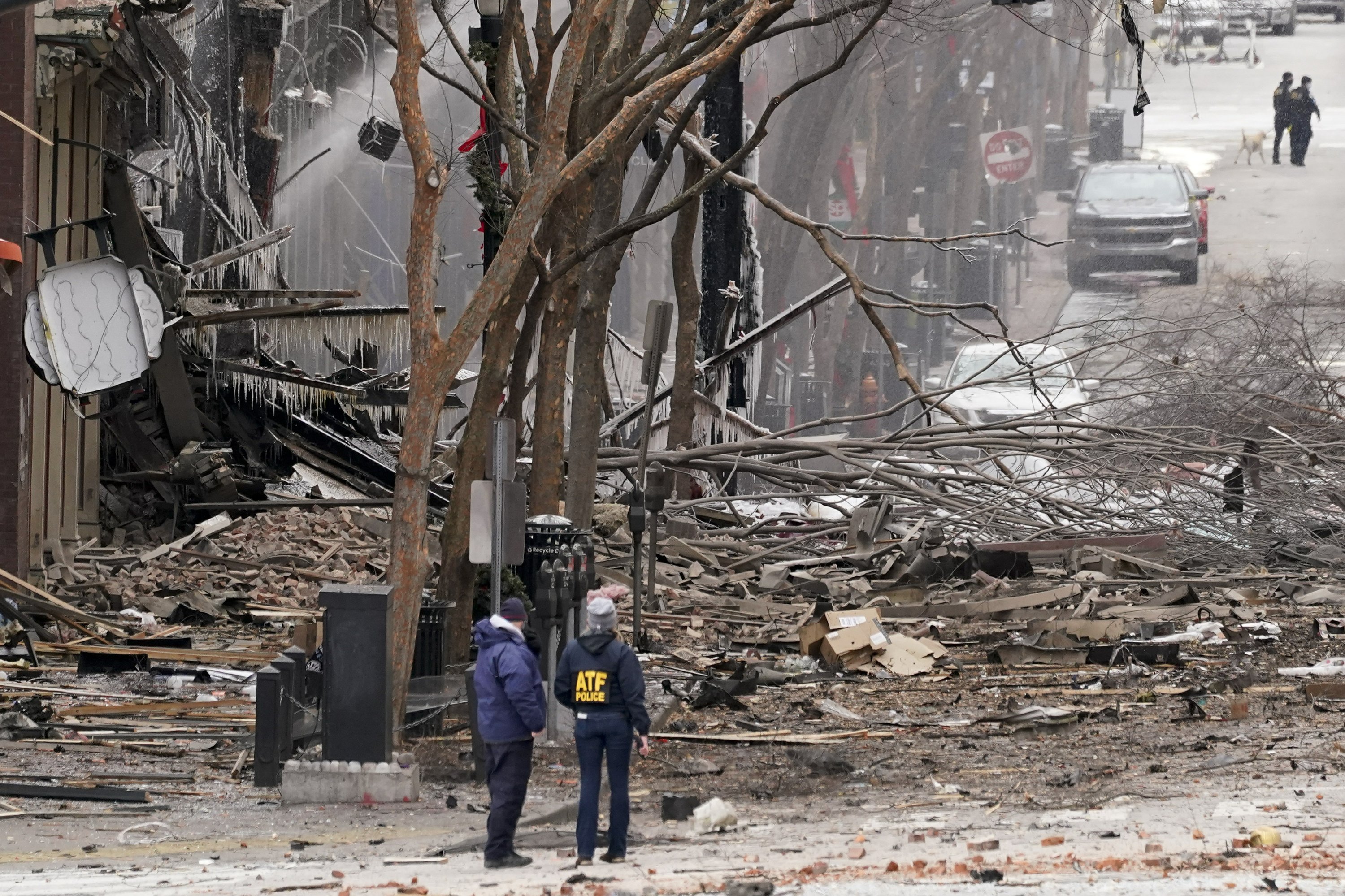 Police: Explosion in Nashville believed to be ‘intentional’​ 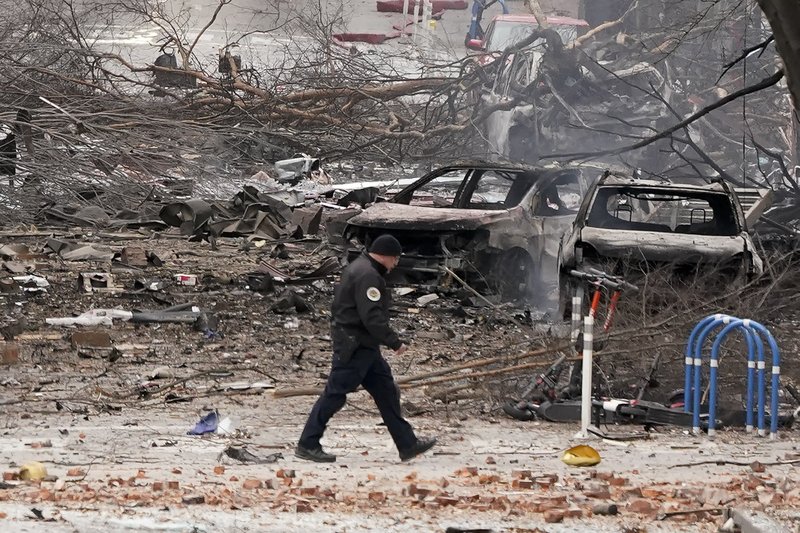 Metro Nashville Police Department spokesman Don Aaron said police responded to a call of shots fired just before 6 a.m. but found no immediate signs of a shooting, although officers noticed a suspicious vehicle and called for a hazardous unit. While they waited, the vehicle exploded.

The FBI will be taking the lead in the investigation, said spokesman Joel Siskovic. Federal investigators from the Bureau of Alcohol, Tobacco, Firearms and Explosives were also on the scene. The FBI is the primary law enforcement agency responsible for investigating federal crimes, such as explosives violations and acts of terrorism.

An explosion rocked downtown Nashville early Christmas morning.
Don Aaron, a spokesman for the Metro Nashville Police Department, said authorities believe the explosion of an RV at around 6:30 a.m. was an "intentional act." Three people were taken to a hospital for treatment, but none were in critical condition, according to the Associated Press.
Police are partnering with federal law enforcement for an investigation and have restricted traffic in the downtown area.
In a late-morning press conference, Aaron said the explosion happened after police responded to a call about a suspicious vehicle near the AT&T Building and called the hazardous devices unit.
Aaron said officers were going "door to door" to clear people to safety when the explosion, which caused "significant damage to the infrastructure" on the block, took place.
One officer was "blown to the ground" and sustained hearing loss, which Aaron said he hoped would be temporary. The spokesman also said police explosive-detection dogs are sweeping the area for other devices, but authorities don't have an indication that there are any.​

FULL STORY AND PHOTOS at this link --> https://www.washingtonexaminer.com/news/christmas-morning-explosion-rocks-nashville

Nashville authorities believe an explosion that occurred in downtown Nashville early Christmas morning was an "intentional act" and sparked by a vehicle blast.

Police came across a suspicious RV parked outside a nearby AT&T building near Second Avenue and Commerce Street before 6 a.m., when initially responding to calls of shots fired in the area, said Metro police spokesperson Don Aaron.

There was no immediate evidence of any shooting but officers alerted the department's bomb squad, which was en route when a "significant explosion" happened about 30 minutes later, Aaron said.

Just before the blast, witnesses in the area report a dire warning coming from the RV: “Evacuate now. There is a bomb. A bomb is in this vehicle and will explode."

Then, the voice started a 15-minute countdown.

Officers were conducting door-to-door checks in the area and redirected a man walking his dog along the street. The force of the explosion knocked an officer to the ground. Three people were hospitalized with injuries, police said.

Aaron said it was unclear if anyone was inside the RV when it exploded.​
FULL STORY and VIDEO at this link --> https://www.tennessean.com/story/ne...own-nashville-explosion-christmas/4044635001/
M

GOLD Site Supporter
Our son lives about 10 miles from there and heard it loud and clear. Judging by the damage I'll guess it was ammonium nitrate.

Waiting to hear a motive.

GOLD Site Supporter
I feel ya. Not the kinda post I wanted to read, but this is the world we have created.
M

Melensdad said:
Cheap easy and available as an explosive.

Not easily available as you have to have a blasting license to buy it since OK city. I wonder what kind of explosive charge is needed to initiate tannerite?

GOLD Site Supporter
easy out here if you have farming connections... Tannerite's off the shelf around here.

GOLD Site Supporter
I’m curious why they had the audible warning. Kinder gentler terrorists? Test run? Gauging the response?
it’s not the typical act. If you want to see how big of a bang you can make without hurting anyone a city is a strange place to do so.

GOLD Site Supporter
That's what i was thinking. Why the warning? I'm assuming to reduce the possible charges they would face upon sentencing. Like Bank robbery but not using a real gun and instead, a finger in your pocket. Big difference in sentencing ranges. This was sent as a message of things to come to those that don't head their message. That message will come. It will be posted.
M

GOLD Site Supporter
I think one "expert" on the news hit the nail. He said with the 15 minute warning it was to kill cops. The perp figured in 15 minutes cops would be swarming all around it. Makes sense to me.

GOLD Site Supporter
That, and now they can clear an area without building the bomb, just the recording

I hope they find the perp/perps

mla2ofus said:
I think one "expert" on the news hit the nail. He said with the 15 minute warning it was to kill cops. The perp figured in 15 minutes cops would be swarming all around it. Makes sense to me.
Click to expand...

A lot easier way to affect cops. You park the thing outside the precinct. That's a distraction.

ezroller said:
easy out here if you have farming connections... Tannerite's off the shelf around here.
Click to expand...

Real farmers, and people with connections to a farm have easy access.

Tannerite is on the shelves here too. But it takes a high impact to set it off. Rifle velocity impact. Handgun won't do it. Could have been suicide bomber with a rifle and Tannerite.

Real farmers, and people with connections to a farm have easy access.

Tannerite is on the shelves here too. But it takes a high impact to set it off. Rifle velocity impact. Handgun won't do it. Could have been suicide bomber with a rifle and Tannerite.
Click to expand...

The footage would have recorded the shot, and it takes a person to be within range of IED. Most would want to be long gone. Got all the makings of a lone wolf flexing.
M

GOLD Site Supporter
Since they think they found human remains from the blast maybe the shot was made inside the RV.

mla2ofus said:
Since they think they found human remains from the blast maybe the shot was made inside the RV.
Click to expand...

If that’s the case, I give the guy a very small amount credit for warning of the bomb, that could have taken out a lot of innocent people.
Christmas can be a hard time for many, this year more so. He/she would have had time to change their mind during the countdown without anyone coming in, plus give people a chance to flee. Going out in a dramatic fashion is what some choose to do. 8 years ago on Christmas Eve in Webster NY a guy set fire to his house and waited for the first responders to arrive, he killed two firefighters and wounded three others before killing himself.

I hope the remains are the bombers and not someone else’s.