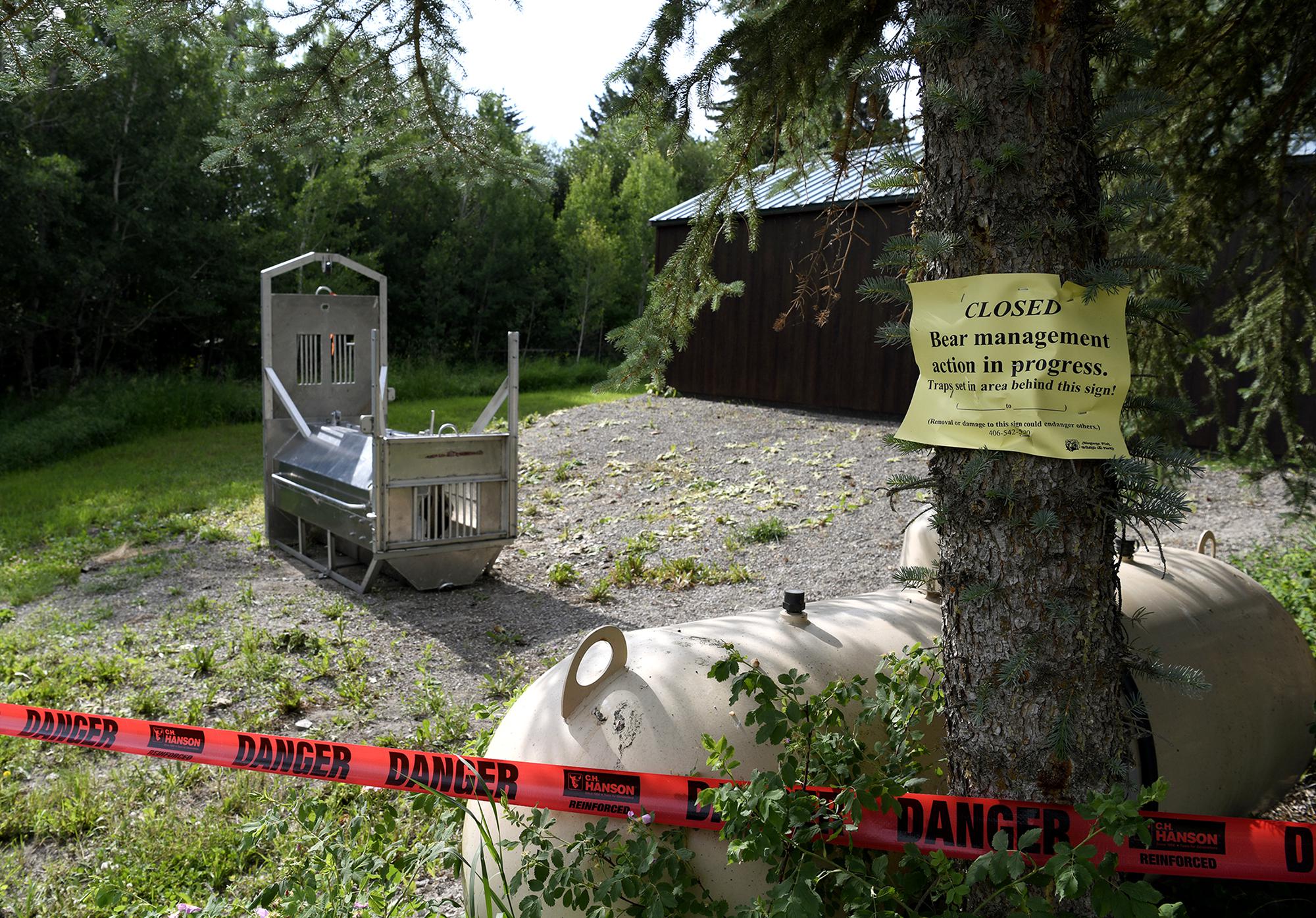 Montana town of grizzly attack a popular stop for cyclists

HELENA Mont. (AP) — A tiny western Montana town where a grizzly bear pulled a woman from her tent and killed her this week welcomes visitors year-round to the mountain valley community along the banks of a river made famous by the movie “A River Runs Through It.”

Bear pulls woman out of her tent, kills her in Montana​ 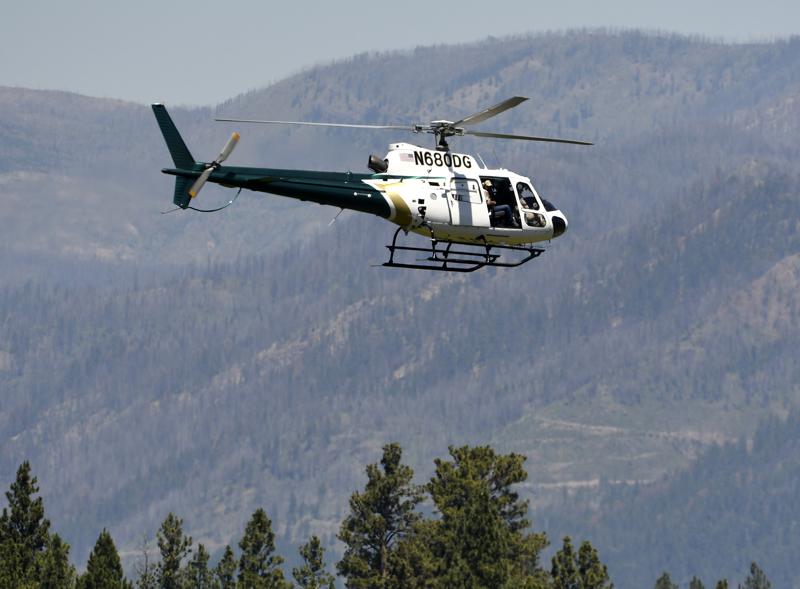 ​
HELENA Mont. (AP) — A grizzly bear pulled a woman from her tent in a small Montana town in the middle of the night and killed her before fellow campers could use bear spray to force the bruin out of the area, wildlife officials said. ​
​
Leah Davis Lokan, 65, of Chico, California, was on a long-distance bicycling trip and had stopped in the western Montana town of Ovando when she was killed early Tuesday, said Montana Fish, Wildlife and Parks officials as they provided more details about the attack. ​
​
Lokan was killed on the bear’s second visit to the site where she and two fellow bicyclists were camping near the post office, officials said. The approximately 400-pound (181-kilogram) grizzly first awakened the campers about 3 a.m., officials said. They took food out of their tents, secured it and went back to sleep, they said.​
​
Surveillance video from a business in town showed the bear about a block from the post office about 15 minutes later, wildlife officials said.​
​
About 4:15 a.m., the sheriff’s office received a 911 call after two people in a tent near the victim’s were awakened by sounds of the attack, Powell County Sheriff Gavin Roselles said. They discharged their bear spray, and the bear ran away. ​
​
The bear is also believed to have entered a chicken coop in town that night, killing and eating several chickens. ​
​
Efforts to find and kill the bear entered a third day Thursday. Wildlife officials stopped the helicopter flights that were used in the initial search for the grizzly and set five large traps — made out of culverts and baited with roadkill — in and around Ovando. That included traps near the chicken coop that the bear raided the night Lokan was killed.​
​
Investigators got DNA left by the bear at the scene of the attack and could compare it with any bruin they are able to trap. Bear specialists and game wardens also were stationed near the traps to shoot the animal if the opportunity arises, said Greg Lemon, Montana Fish, Wildlife and Parks spokesperson.​
​
“Our best chance would be if the bear comes back and tries to get another chicken or some more food around town,” Lemon said. “Our wardens, they feel like they could readily identify the bear that they saw on the (surveillance footage) and if they saw that bear at the trap and had a clear shot at it, they might choose to do that.”​
​
Lokan, a registered nurse who had worked at a hospital in Chico, had looked forward to the Montana bike trip for months, said Mary Flowers, a friend of the victim’s from Chico. Lokan had taken previous long-distance bike trips and on this one was accompanied by her sister and a friend, Flowers said.​
​
“She was talking about her summer plans — this wonderful wild adventure, riding her bike on, I don’t know, a 400-mile trip or something,” Flowers said. “A woman in her 60s, and she’s doing this kind of stuff — she had a passion for life that was out of the ordinary.”​
​
People who camp in grizzly bear country — whether deep in the woods or in a developed campground — are advised to keep food and scented products like toothpaste away from their campsites at all times and to cook elsewhere.​
​
If a bear comes through a campsite, it’s important to stay on lookout for the animal to return, Lemon said. ​
​
“You’ve secured your food, stay awake, stay vigilant and be ready,” he said. “Having bear spray is important, and they did, but we don’t know if the victim did.”​
​
Grizzly bears have run into increasing conflict with humans in the Northern Rockies over the past decade as the federally protected animals expanded into new areas and the number of people living and recreating in the region grew. That has spurred calls from elected officials in Montana and neighboring Wyoming and Idaho to lift protections so the animals could be hunted.​
​
Ovando, about 60 miles (97 kilometers) northwest of Helena, is a community of fewer than 100 people at the edge of the sprawling Bob Marshall wilderness.​
​
North of Ovando lies an expanse of forests and mountains, including Glacier National Park that stretches to Canada and is home to an estimated 1,000 grizzlies. It’s the largest concentration of the bruins in the contiguous U.S. ​
​
Fatal attacks are rare in the region. There have been three in the last 20 years, including Tuesday’s mauling . . . ​
M

GOLD Site Supporter
Bear spray is fine, I carry it while on the mountain, I also carry a Winchester 1886 in 45-70 with a 44 mag. Ruger revolver in a chest holster. If they had something besides bear spray the poor woman might still be alive and they wouldn't be looking for the bear. Fatal attacks are on the rise. The more people and bears interact the more incidence there will be. People feeding bears are a big problem, yes a little black bear can be cute and you may get away with it for a while until you turn around one day and there he is and you don't have any food for him or he has now lost his fear of humans and approaches other people for food, at some point it will turn bad. Think about what a 60# pitbull can do to you. A 150# black bear would have 0 trouble killing and eating a 250# man in short order. I have no interest in shooting one but a bad attitude bear inside of 50' and moving towards me would soon meet a 405 grain hard cast bullet doing 1400 fps.

Staff member
GOLD Site Supporter
They are in bear country, rule 1 is that FOOD should never be in/near the tent. Rule 2 is that if a bear is in the area, then someone stays on watch. I'm sorry the woman died and I don't think she was "asking for trouble" but nobody in the group was aware of even the basics of how to be safe in bear country.

Staff member
GOLD Site Supporter
And they believe the bear is now dead.

​
A grizzly bear that yanked a camper from her tent during a fatal attack may have been killed after another incident, Montana officials said. However, it will take several days to determine if it was the same bear using DNA testing.​
​
The Powell County Sheriff’s Office said Friday that after a days-long search, a grizzly bear was shot and killed in the same area where a woman was pulled from her tent by a bear on Tuesday. Montana Fish, Wildlife and Parks officials said the bear was about 2 miles from the area.​
​
“Last night, the Powell County Sheriff’s Office took a report from a resident who came home and found her door ripped off and large claw marks were present,” the sheriff’s office said on Facebook Friday. “A short time later a male grizzly bear was killed in the area.”​
​
Officials took samples of the bear’s DNA to determine if it was the bear involved in the fatal attack.​
​
“Given the proximity to Tuesday’s attack, the evidence found at the scenes and the fact another chicken coop was raided, Montana Fish, Wildlife & Parks officials believe this is the same bear,” officials said Friday in a news release.​
​
The Powell County Sheriff’s Office also said it is likely that the bear that was shot was involved in the attack.​
​
“We hope to make positive identification within the next couple of days,” officials said. “Early indications are that this is likely the bear that was involved in Tuesday’s attack.”​
​
Leah Davis Lokan, a 65-year-old from Chico, California, was camping near Ovando, Montana, a small rural town northwest of Helena, when she was attacked by a grizzly.​
​
She and two other campers were woken up by a bear earlier in the night. They removed food from the area, secured their tents and went back to sleep.​
​
Hours later, the couple in the group was startled awake by the sounds of a grizzly attack. The 400-pound bear had yanked Lokan from her tent, wildlife officials said.​
​
The couple sprayed the bear with bear spray, and the bear hadn’t been seen since.​
​
Lokan was an avid bicyclist and was traveling through the Great Divide Mountain Bike Route when she was attacked by the grizzly, according to CBS News.​
You must log in or register to reply here.
Share:
Facebook Twitter Reddit Pinterest Tumblr WhatsApp Email Share Link
Top