Due to the lack of water "Fence Diving" is a popular Arizona sport.

CHANDLER, AZ (3TV/CBS 5) - A trooper with the Arizona Department of Public Safety dove over a fence and apprehended a suspect after an attempted traffic stop and short pursuit in Chandler Friday morning.

A trooper with the Arizona Department of Public Safety dove over a fence and apprehended a suspect after an attempted traffic stop and short pursuit in Chandler Friday morning.
Trooper Kameron Lee with DPS said troopers had attempted to make a traffic stop of the vehicle near U.S. 60 at Rural Road.
Lee said the car did not stop and a pursuit was initiated. The vehicle then exited southbound Loop 101 at Elliot Road where the driver lost control, causing the car to spin out.
The driver, later identified as 24-year-old Brandon X. Vierra, 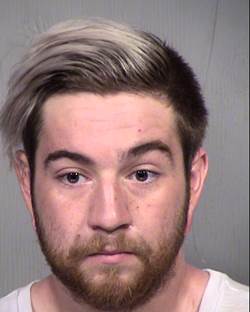 exited the vehicle and fled on foot, Lee said.
A view from the Arizona Department of Transportation's freeway camera showed Vierra hop over a nearby fence during the chase.

The trooper dove over the fence and was able to take the man into custody without further incident.
Arizona's Family viewer Martin Sprau was on the other side of the fence and posted his video on our Facebook page.
Lee said Vierrahas two outstanding warrants and is being investigated for possible impairment as well.
DPS spokesman Quentin Mehr said Vierra had a bag containing "some personal use drugs and drug paraphernalia," on him when he was taken into custody.
According to Mehr, Vierra is facing a long list of charges, including felony flight, giving false information, criminal damage, resisting arrest, and drugs possession.
Click to expand...