Some of our universities have already announced they are cancelling graduation ceremonies in mid-May. Universities are separate from our K-12 education system our elementary & high schools may follow very different paths than our universities. 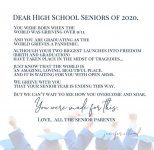 Up here, they closed the schools until April 5th but it's looking very likely that will be extended. And realistically, say they do go back the first or second week in may. They don't do much of anything in june other than watching movies anyways so is it really worth going back after a month and a half for 2 weeks of actual learning? See you in September.
A

The last 2 years are very hard for everyone and almost the world was shut down due the Covid 19 ...
C

ahvccenter said:
The last 2 years are very hard for everyone and almost the world was shut down due the Covid 19 ...
Click to expand...

Yeah! And we complain but think about the chinese who had to suffer the zero covid policy, and now they have to suffer the consequences of a massive outbreak after such a long period of no mixing and mediocre vaccine quality
P

Cyber Geek said:
Yeah! And we complain but think about the chinese who had to suffer the zero covid policy, and now they have to suffer the consequences of a massive outbreak after such a long period of no mixing and mediocre vaccine quality
Click to expand...

Shit is getting DEEP in here.
C

PGBC said:
Shit is getting DEEP in here.
Click to expand...