GOLD Site Supporter
This is an EPIC TALE, that covers several continents, generated worlds records, led to all sorts of developments including Monster Trucks!
In 1955 the US ARMY contracted with LeTourneau of Texas to build a mammoth machine called THE OVERLAND TRAIN, or THE SNOW TRAIN. Some of the information in this story you won't find in other sources. A lifelong close friend of mine was an engneering student a LeTourneau's School and worked on building both a life size mock-up out of plywood and the real machine. He even gave me a hand sketching of it which alas in my many moves I have misplaced.
View attachment overland1.bmp

SUPER Site Supporter
I have seen videos (old films) of this thing moving across the snow. BUT I never thought it was this BIG! That thing is huge.

GOLD Site Supporter
There were articles about it in Popular Scince and Popular Mechanics as well as a bunch of other magazines. Arnie, who later became an engineer for DOT actually Knew Mr. LeTourneau, rode horses on his ranch by the school to round up cattle, and chased around after his daughters. When they tested the prototype in one of the major Texas city's, Dallas or Ft. Worth, they were actually able to get it to track around a city block so that at one intersection the Overland trains cars were passing each other in opposite directions. IT WAS A NEWS EVENT! This little stunt was photographed and filmed. The Cars of actually popped manhole covers out of the street! The LCC-1 had a huge Cummins V12 that ran a generator that in turn powered DC motors in the 'Locomotive' as well as in the 10 Cars. It had the largest tires at the time, 10 Foot. Several were built. Later models were even larger. The later model had 12 Foot tires, was listed as having a 1/4 Mile turning radius, and was 570' overall. At 30 foot tall(23 with the RADAR Antenna folded down!) the cab slept 6 and had a galley and bath facilities. The Cab and the first car after the cab had jet turbines instead of reciprocating engines. They were shipped to various places to be tested including to Alaska. Around 1969 the last one was auctioned off by the military and I managed to get a copy of the militarys DSSO pamflet. It didn't get any serious bids so they put it up for Rebid and it was purchased by the Anaconda copper mine in Brazil. The next to the last machine was purchased by a scrap dealer in California and scrapped out.

GOLD Site Supporter
I actually got the millitary sales borchures before I met Arnie, when I was in high school or Jr. High. Anyway I was a fan, and he had plenty of stories. Some years later I went to work in Alaska. The Cars were everywhere around Fairbanks. I eventually tracked down the owner of an Ex Military Junkyard reffered to by locals as well as the local paper as "Stinky Pete" or "Greasy Pete". Pete was Great! He actually worked on the building of the ALCAN (Alaska Highway)when he was young and had a working dozer in his yard that was used in the massive 1942 campaine to connect the "Lower 48" to Alaska. Besides OWNING the serial number one Locomotive of the Overland Train he had lots of the 25 Ton Cars. I climbed around on it and over the years I got to know him. I even dug into the electrical system and tried to get the Locomotive running. The last time I saw pete he was about 94, still living in a one room shack with a wood stove at his junkyard.

GOLD Site Supporter
When Pete purchased the original machine it was operable and at one point the ARMY hired him to come and pull out one of the newer units that was stuck up on the North Slope. He said Spruce Snags would tear up the tires which would in turn burn out the electric motor wheel drives. The development of these massive machines led directly to Earth Mover development. The Story of LeTourneau is and entire SAGA in itself.
View attachment overland2.bmp

GOLD Site Supporter
This things in the Guinnes book of worlds records! I never got to see one of the newer models up close, but not many people can say that they worked on one of these. I made sure to get lots of pictures climbing around and working on Pete's number one machine. Pete even had the ORIGINAL Service Manual which I spent many hours trying to understand the schematics.

Lyndon said:
The Story of LeTourneau is and entire SAGA in itself.
Click to expand...

My oldest son went to LeTourneau for a year. Things just didn't work out for him down there and we now call it his 20K blunder. Still it is one of the best engineering schools in the World.

If you ever get time get RG LeTourneau's book. It will take a couple hours to read but it is a good story. And the man is originally from Minnesota

GOLD Site Supporter
Even though this is not me in this picture, I have a vertually identical picture. Anyway the story doesn't end there: One of the cars sat in the Seattle industrial district for years. Eventually a man who wanted to build an inordinately big off road personal vehicle for show bought one for the tires and this became the first "Big Foot" truck. You can see interview's with him on the discovery show where he recounts this. The development also led to improvements in tire Design as well as the development of the Electric Wheel drives currently used in the immense LeTourneau Loaders and Mining Vehicles. There are plenty of pictures of the Snow Train in action but it may take some time to find them.
View attachment overland3.bmp

GOLD Site Supporter
If you go North out of Fairbanks on the Steese Highway, just past the public viewing place for the trans alaska pipeline sits a tourists trap called Pump station 13. They have one of the cars from the Overland Train there that has a home made cab to make it look like one of the locomotives. To view the REAL Thing go East out of Fairbanks on the Richardson Highway to the first turn off for Badger Road. Right after you cross the Railroad tracks on the right is Old Pete's place. It's pretty easy to spot as it is so large. It's faded orange and if I recall correctly it has Air Force markings. The Locomotive and several of the cars are there. This first serial number one unit Locomotive had only 4 wheels instead of the 6 on the later locomotives. The huge V12 had a massive 24Volt starter on EACH side of the engine and there was enough space for a person to walk standing up on either side of the engine. The Last of the even larger Mark 2 units went to a military base in the midwest and was shipped there in pieces as it was too large to pass thru railway tunnels and bridges. When it got auctioned off some years later, a new interstate had been built further restricting it's shipping off the base. It went to Anaconda's massive open pit mine in Brazil. This mine was esentially stolen from Anaconda by the government there in a process called 'Nationalization' where they basically point a gun at the workers and tell them to get out. As a result of this LeTourneau refused to sell them parts and the unit is no longer operational. At auction it came with about 20 spare tires and a bunch of the electric wheel drive assemblies. Old Pete's was a very colorful individual and his machine faces a similar fate. His junk yard used to be a military junkyard and it is one of the Hazardous Waste Superfund Clean-Up sites. The government was never able to force him out so they figgured they would just wait for him to die, that was 25 years ago and as of this past fall he was still hanging in there. Once he goes the fate of the overland train is uncertain. Another of the locomotives, the one pictured above is at a museum site. Some documentaries of the construction of the Alaska Pipeline show one of the Snow Trains in action.

GOLD Site Supporter
Perhaps I can prevail upon our leader Bob S., or one of our members that has more advanced computer skills to add a linc to University of Alaska Film Collection, under LeTourneau Snow Train is a 42 second clip of the Snow Train in action. Also on another site I found the earlier machine in fairbanks that I worked on. So far I havn't run into anyone here that saw or worked on it. -39 is pretty cold today.
M

Here's the link to the clip Lyndon, pretty cool!

Actually lots of interesting clips on the film collection website. Search for yourself:

Thanks for the links mtmogs. Good job.

Lyndon said:
... Eventually a man who wanted to build an inordinately big off road personal vehicle for show bought one for the tires and this became the first "Big Foot" truck. ...
Click to expand...

They were permanently mounted on his fifth vehicle in the line. (Although mounted for short periods of breakage on the 1st vehicle.) It wasn't built untill '86. It was built specially to accomidate the 10' diameter tires.

There's some neat pics of the big military rig on his site.

GOLD Site Supporter
Just finished reading: Mover of Men and Mountains, the autobiography of RG LeTourneau. Interesting charecter. Saw the guy that created Big Foot give his account of using the tires on discovery last week at the 'Camp'. In a couple of weeks my lifelong friend that worked for LeTourneau on the above pictured 'Beast', turns 70. One of his cousins was a "lifer" engineer with porsche. I won't be making it to the festivities in Mass, but I will try to visit shortly after. I'll see if he has any other 'stories' about LeTourneau or Pics.

GOLD Site Supporter
PS: In LeTourneau's biography is the photo I described of the Snow Train driving through the city streets that I described earlier.

GOLD Site Supporter
Here it is, the Tractor/Locomotive for the first of several "Snow Trains" built by LeTourneau, in a junkyard outside Fairbanks. 3 years after I took the picture I worked on it in an attempt to get the electric steering to work. The Engine generator set was impressive, a huge Cummings V12, that had (2) 24 Volt electric Starters each too big for a person to pick up, one mounted on each side with it's own set of batteries. > 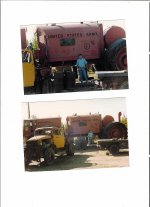