I played with Snowmobiles years ago and on occasion drove the clubs Thiokol groomers.

I always wanted to own a Thiokol Spryte, but never seemed to have time to gitterdone.

Well, after retiring from trucking (Local heavy haul sand and gravel ) I have bounced around and have been bored to tears.

Recently while surfing the net I ran into some info on Snow cats and some of the mods that folks have done.

I decided that at 64 yo it was now or never if I was going to have a cat now was the time.

My days running the Groomer left a permanent impression of how few creature comforts were in the Thiokol Spryte.

With the idea of comfort in mind I set out to do some snooping to see what had been done by others and what tickled my fancy.

The project must be affordable on my retirement $$$$

I found all sorts of Cats out there that had been modified, tweaked, tricked and on and on.

I wanted LOW COST, easy to find parts and something comfortable to drive when it was finished.

Decided to go with the Spryte 1200 series, or at least in that direction.

The finished rig needs to be no more than 102" wide MAX so I can take it down the road without being over legal width.

I loved the van as it had great forward visibility and was easy to get in and out of.

The Safari's are plentiful and can be had CHEAP

So
Next I started a search for a used cat and a Safari van.

Placed some want ads and sat back to see what shakes out.

A fellow called me and we made a super deal.

With the body issue taken care of the next hurdle is finding a cat.

It became real obvious that buying a used cat and tossing most of the thing on the scrap pile just to get the frame and such was just a bad idea.

The few cats I looked at had cracked frames, cracked axles and were just a mess.

I also decided to build my own axles and instead of using the Torsion rubber device on the trailing arms, to build simple articulating trailing arms and add a small air bag to each one with positive up and down stops
.

This set up will alleviate the twisting on the axle and frame and the tendency to break things.

We shall see what shakes out.

I am no stranger to gear boxes so rebuilding the box is all in a days work.

I am looking for a good used diffy now.

With the find of the diffy the rest can take shape readily.

The plan is to mount the Safari body on a set of parallel rails on the main frame that will allow it to roll rearward far enough to fully access the engine for service/repair that would otherwise be a real pain through the hood or dog house access.

An access panel in the rear floor area of the body will allow access to the diffy for service of the steering cylinders and ?????


The plan is coming together slowly, but we are moving ahead.

The next item will be a set of the 3 foot Spryte tracks.

A rear diffy and tracks will get this beast off to the rodeo.

Looking forward to this build.

Gonna be a slow go me thinks.

I will be in and out and add what I can as it happens.

Hi Snowy and welcome. Sounds like an ambitious project with some good ideas. You might look around for a 2100 Thiokol for the rear diff as those can be found fairly cheep. It would require narrowing the axels but you would get a hydraulic power assist too,
A spryte would be best if it had a good diff and tracks as those are going to be the most expensive pieces of your project no matter how much fab work you do.

Thanks for the advice.

I might could help you on tracks and diff I know of a good 0c 12 and a set of tracks with crappy rubber from a burned out sprite. I talked with the owner once in the past about salvage he was kind of wishy washy about it. I could try again this summer if you wish

See what you can stir up

My project is a low budget one.

The big tracks of the thiokol are far more appealing to me.

The rig will not be used other than on my acreage in good weather and on the roads in Snow times to get to the store.

See what you can stir up

36 inches is the magic number

I want 3 foot tracks on the beast

I am interested in the gear box/axle and whats left of the tracks. 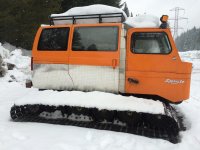 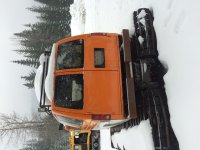 Sorta like this but nicer? This one was spotted last winter just off I-90 east of Snoqualmie Pass.

Sorta like this but nicer? This one was spotted last winter just off I-90 east of Snoqualmie Pass.

Cool pix.
Thank you for posting.

The mods will be to remove the front sub frame and rear springs/axles ect.

Fab up a new frame similar to the Spryte's factory frame, a tad stouter.

The Safari body will roll onto a pair of rails on the "cat frame" and fasten down for operation with the ability to roll back enough to gain access to the engine for service.

Does anyone know the axle rating on the individual axles of the Spryte 1200 series.

I have been looking at Flexiride individual (Half axles) and building the frame with a cross member instead of a bolt in axle.

I can beef up the area that the Flexiride unit bolts on with a weld on doubler plate and bolt on the axle units.

The Flexiride units can be indexed 6 degrees at a time on the spline shaft.

The front end can take a good whallop when dropping off a berm, plus the engine and such are over the front axle as well.

Thanks for the info.

My main concern is locating the OC12 C/L and the bogie spindle C/L by the original design, as well as setting the longitudinal locations by the print.

The rest of the frame, cross members and goodies can be modified to suit the need.

May have to widen the tunnel a tad, but we shall see.

You can buy new torsion axels and order them to you specific width. Trailer wheels and tires will probably be strong enough for your needs but by the time you buy all that plus the sprockets and tracks, these homemade projects start to get expensive. That is why I still think you would be money ahead to buy a Spryte/2100/Skidozer with a blown motor. There is a complete 2100 here in Alaska(which I understand in not feasible) for $3500. There was a Spryte project not to long ago in the states for about the same amount. It will be very hard to get all the undercarriage goodies for less.

Definitely a possibility on the 2100

I have snooped up a couple cats so far, with one being a badly wrecked Spryte 1200 series and a 2100.

Both were pretty sad and still the $$$$$$$$$ were way too much for what I would actually get from them when I get them torn down.


I really need a fairly good set of 3 foot Spryte tracks and the Diffy.

I been sitting here in the cold weather at my drawing table getting some basics sketched up on the frame and undercarriage, with the needs for the mods to get things to integrate with the Safari body the actual usable list of parts from an existing machine is slim at best.

For $1000 I can get a real jump on things and not have a pile of debris to haul off to the scrap yard.

I have time to snoop and be choosy at this point.

I have lots of feelers out there too.

One thing to keep in mind.... So far I have a great body, engine and tranny for only $250 out of pocket.

I have a line on a pile of trailer wheels and tires and we are negotiating on them.

I love "wheelin and dealin" and we live in a location that has lots of goodies laying about.
Crags list always seems to produce whats needed.
I am willing to travel some distance, but living close to Portland Ore, Seattle to the North and several metro areas to the south we have a good area to go "picking" in.

Last year my son in law wanted to do a crew cab on an Army Deuce and a half and repower with a V8 diesel.

We ended up with three 1953 M211 6x6 trucks to work with.
Sold what we don't want or need on Craigs list and came away with 1 running truck in stock trim and two others to build the crew cab custom and $0 out of pocket.

I think at last tally we were up about $200 and have all our goodies to work with.

But that's his project.
I just used my wheelin dealin know how to get what was needed to start with for Zip cost.

Oyut snooping we picked up several things we really did not need, but made $$$$$$$$$$$ on them to help offset the cost of what we did need.


The Franken Cat project will likely be similar type thing.
Buy a little, sell a little, keep a little.

ok--been watching and reading ---its great that you want to build a cat---the very first thing you need to do is forget the word budget----ooooooops sorry I mean affordable ---I have built lots of things from the ground up--its very costly buying all the parts and pieces ---u state that you want to build frame up----it is a real pain in the ass fitting this and clearing that if you know what I mean---just to make it steer u will need to build frame add the rear end and set body to figure out where stuff goes and fits than pull body and fit motor set body fit all that crap including fuel tank in the frame somewhere near the drive shaft and than shoe horn a ex. system in there with a cat. and 02 sensor because your running tbi-----and btw trailer tires will work till you go for your first ride and a track guide takes out a side wall------just sayin ---lol----o ya did you see the track van for 12,500 that's a good deal----here is a small scale of what your building and it was tough clearing and hiding all internal workings and this is hydroststic which saved me room ----------and always remember---your tracks stop on the bottom