Staff member
GOLD Site Supporter
I want to see breakdowns by STATE to see if there are some areas impacted harder than other areas. I'd like to know if the state lockdown policies helped or hurt small businesses. We know some states never locked down. Some did for only a short period of time. Others for a long time. Which state's small businesses fared well, which state's policies killed the independent businessmen?

This source is pretty much a right wing news agency and they show their bias, but if the data is correct then policies need to be changed. 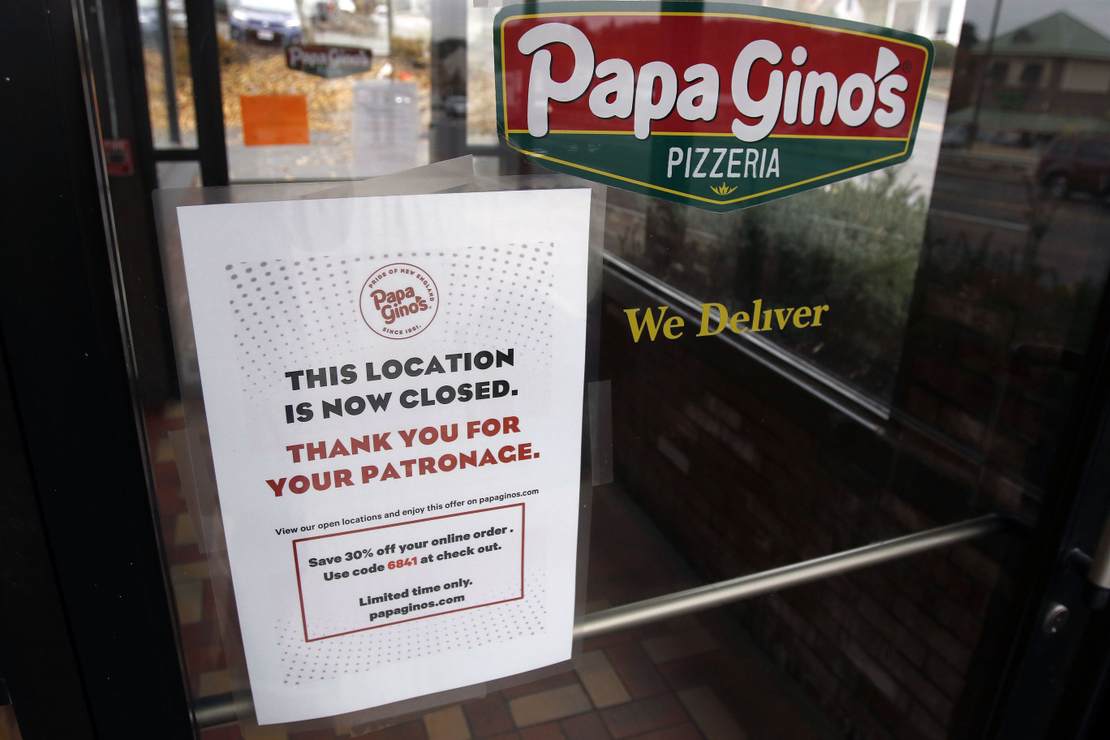 COVID shutdowns championed by U.S. governors and D.C. bureaucrats are responsible for destroying nearly 40% of small businesses since the virus was unleashed on the world—and we know now that it was f...


COVID shutdowns championed by U.S. governors and D.C. bureaucrats are responsible for destroying nearly 40% of small businesses since the virus was unleashed on the world—and we know now that it was for little to no damned good reason. A study by the Proceedings of the National Academies of Sciences revealed recently that shutdown orders made little to no difference in COVID’s impact. From the abstract of the study:​
​

And it should have been evident for those caring to look.​
​
While bureaucrats gave Walmart, Costco, Lowe’s, and other big-box stores “essential” status, allowing them to stay open during the COVID pandemic, 38.9% of America’s small businesses, the providers of most of the country’s jobs, were forced to closebased on fear, hackneyed social-distancing rules, early ignorance about transmission, and an insatiable desire by governors to micromanage the affairs of men.​
​
In short, small businesses could have operated the entire time, exactly like big-box stores did, had it not been for tyrants in statehouses and mayor’s offices around the country destroying lives in the name of “science.”​
​
Twitter user Mark Changizi showed the precipitous drop in small businesses in a series of charts from both Womply and Harvard. When he first checked, 37.5% of businesses had been closed. That number is now 38.9% as of June 13. That’s far worse than when he used the word “decimated” to characterize it.​
​
Most of the destroyed businesses were in the hospitality industry.​
​
The states hardest hit were those dependent upon those industries: California, Florida, New York, and Washington, D.C.​
​
Some governors, among them West Coast governors Gavin Newsom of California, Jay Inslee of Washington, and Kate Brown of Oregon, still refuse to give up the emergency powers invoked during the pandemic so they can drop the hammer on people’s freedom at their next whim.​
​
Reason magazine characterizes the clinging to emergency powers by these governors as tyrannical.​
​

California Gov. Gavin Newsom has responded to the COVID-19 pandemic with a controlling, micromanaging leadership style that few other governors can match. Even as other states have lifted a lot of COVID-19 restrictions for those who have been vaccinated, following the guidance of the federal Centers for Disease Control and Prevention (CDC), the California Democrat is ordering the state to re-open on his terms, not easing up the rules until June 15.​
Click to expand...

In addition to Newsom’s body count, governors in other West Coast states, Pennsylvania, and New York—from their orders putting sick grandmas into nursing homes to the huge increase in suicide rates—have a death count of businesses and the economic calamity that resulted.​
​
And that’s not a small number.​
​ 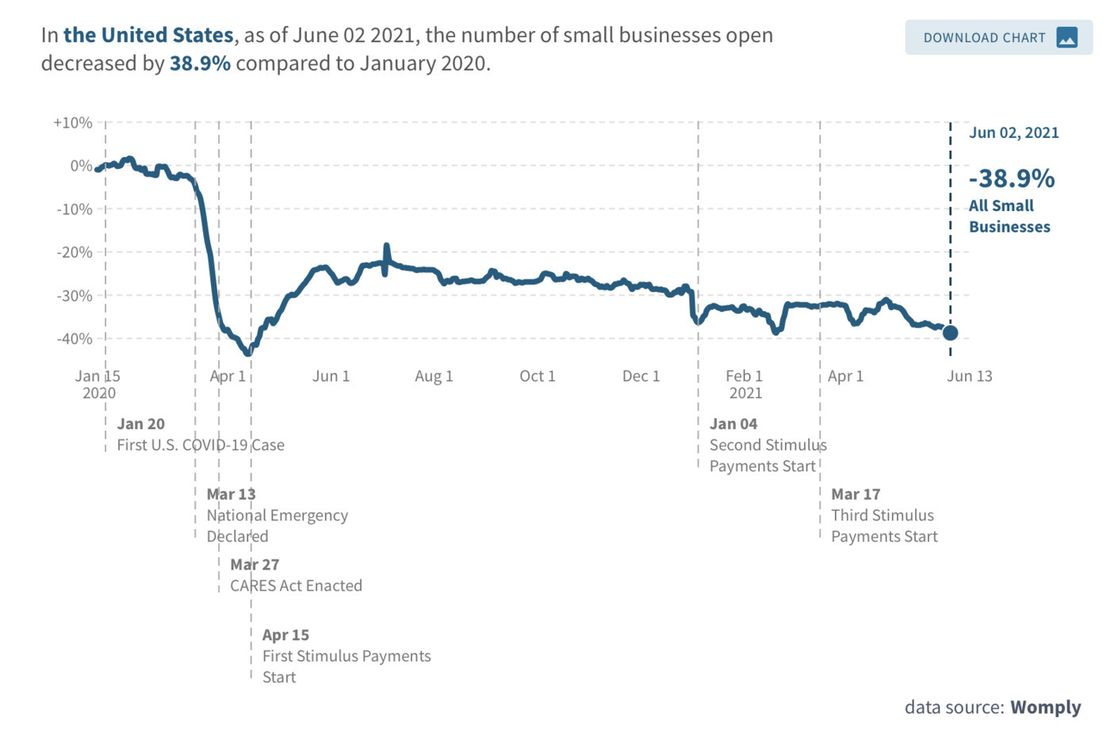 (Credit: Womply)​
Small businesses –- those with fewer than 500 employees -– are 98% of the businesses in America. They are responsible for 62% of all U.S. jobs. Fully 89% of these small businesses employ 20 or fewer employees. They are the backbone of job creation and an expression of American enterprise, entrepreneurial spirit, and individualism.​
​
You’ll also notice on the graph above that the latest stimulus payments appear to have had little to no impact on the ability of small businesses to stay open.​
​
We’ve learned a lot since China unleashed this virus on the world. These small business shutdowns are just another example of destroying the village to “save” it … with good intentions and police powers.​

GOLD Site Supporter
I had to run to Arthur Illinois today. I took the scenic route home down MO HWY 79 from Hannibal to St, Peters.
It follows the river and has some amazing small river towns. Both Louisiana and Clarksville are meccas for small bars, restaurants curio shops and antique stores Most of the shops were simply gone. Two years ago they were thriving with tourist and young people having good times.

Old St Charles 2nd Street was one of the hippest and highest priced real estate in the county. Now it is almost a ghost town.
The casino, considered essential, is thriving.

My company was llucky. We landed a mask contract. Or we would have ben dead in the water.

GOLD Site Supporter
I would love to see this broken out by State as well..
In my State of Iowa I bet that percentage is much lower than the national average the article appears to be using.
My guess is that States that are controlled by Democrats faired much, much worse than Republican lead States.

GOLD Site Supporter
It's the same situation up here in Canada. Many small businesses are now closed never to open again

Staff member
Same here. And ones that have struggled to keep their heads above water are now hurting due to gov stimulus checks and increased unemployment benefits forcing businesses to pay workers more per hour. Seems like a back door way to increase minimum wage.
C

Melensdad said:
I want to see breakdowns by STATE to see if there are some areas impacted harder than other areas.
Click to expand...

Surprisingly, Amazon is trying to step up to the plate for small businesses..

"Amazon is offering its Prime members a $10 credit for every $10 spent on the website’s small business section. Better yet, a number of these top-rated products are also on sale, so you can currently grab them on the cheap!"

Ceee said:
Surprisingly, Amazon is trying to step up to the plate for small businesses..
Click to expand...

Actually the people I know who utilize Amazon for sales indicate it costs them profits. I think what they are doing sounds good but actually may prove to be detrimental to small independent businesses.
M

Melensdad said:
Actually the people I know who utilize Amazon for sales indicate it costs them profits. I think what they are doing sounds good but actually may prove to be detrimental to small independent businesses.
Click to expand...

That number lines up with what my business liability insurance broker told me.
C

Melensdad said:
Actually the people I know who utilize Amazon for sales indicate it costs them profits. I think what they are doing sounds good but actually may prove to be detrimental to small independent businesses.
Click to expand...

m1west said:
That number lines up with what my business liability insurance broker told me.
Click to expand...

But why hasn't anyone tried to take out a loan to stay afloat?

MGRex said:
But why hasn't anyone tried to take out a loan to stay afloat?
Click to expand...

How do you pay back a loan if you can't tell the bank when your store will re-open? Or how long it will be closed? Banks don't lend on speculation, they lend against income and secure your inventory as collateral. And while the government did some things to subsidize businesses for wages, they didn't do anything constructive to cover rent or mortgage payments. Can't keep a business open if it is kicked out to the curb or its equipment is repossessed.

GOLD Site Supporter
I have a personal

MGRex said:
But why hasn't anyone tried to take out a loan to stay afloat?
Click to expand...

No bank will give you a loan if you cannot show ability's to stay afloat and pay it back..
I have a personal friend with a thriving restaurant. Who did take advantage of the government stimulus to pay her employees to stay home. After about 6 months of operating in the red, despite take out and curbside service, they were ready to close.
A call to her bank was received with the cold response that without a monthly profit they would not qualify. Even for a new expanded mortgage
She didn't have a mortgage.
Were it not for the fact she was debt free they would have closed. A mortgage on the building would have been the tipping point.

They are almost back to 2019 levels. Hampered mostly by an inability to retain old help or hire new ones. Thank goodness as we eat there every work day.

bigshell said:
We were one of those who struggled to keep our heads above water. We didn't want to say goodbye to our small business until the last moment.
Click to expand...

Sounds like our story. But then we got lucky. First, we package an essential product which was enough to keep the lights on. And second, wrapping those worthless masks, made an insane profit, and didn't have to borrow. Drained our nest egg, which is scary at age 74. However, thanks to the windfall, that is now restored.