Nice complete original cat with a great service history on Mt. Greylock highest peak in Massachusetts. Was used to maintain the radio tower. 13 mile up and down.

Lived inside well taken care of. Tracks rebuilt by dealer with low hours. Lots of parts to go through. Interior is real nice! Runs real well.

Looking forward to learning and just tinkering/enjoying this one. Keeping as is and preserve in its current state.

Went for a ride today. Pros and cons over pontoon cats but so far I am liking and missing. Wife is warming up so I don't need to move into it yet. So far my track addict support group are big fans! 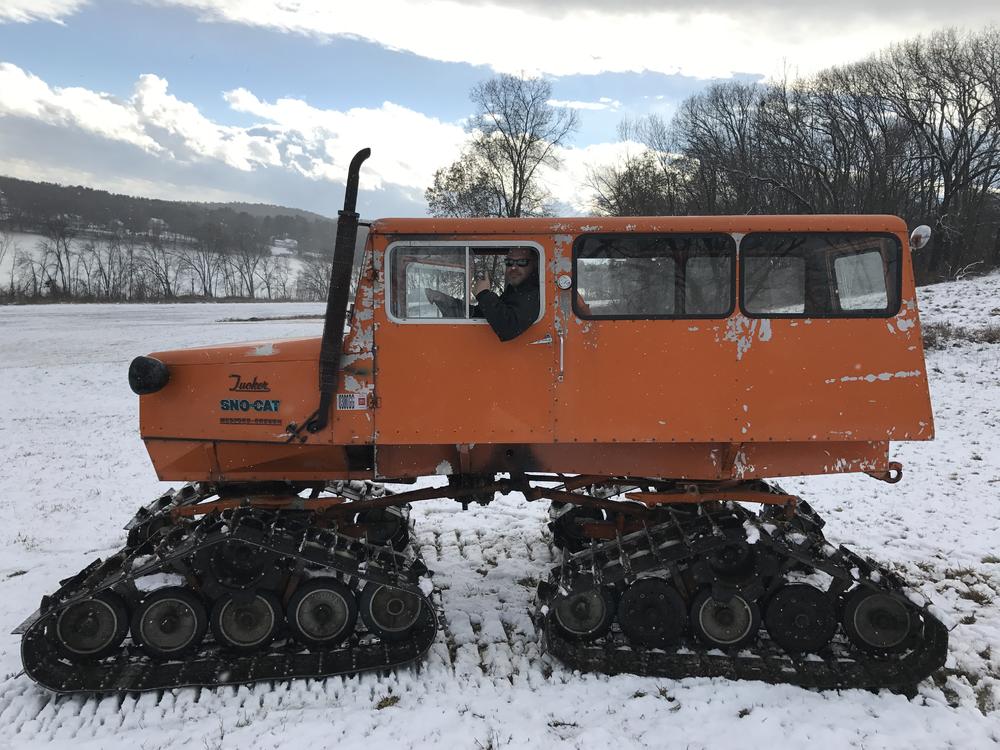 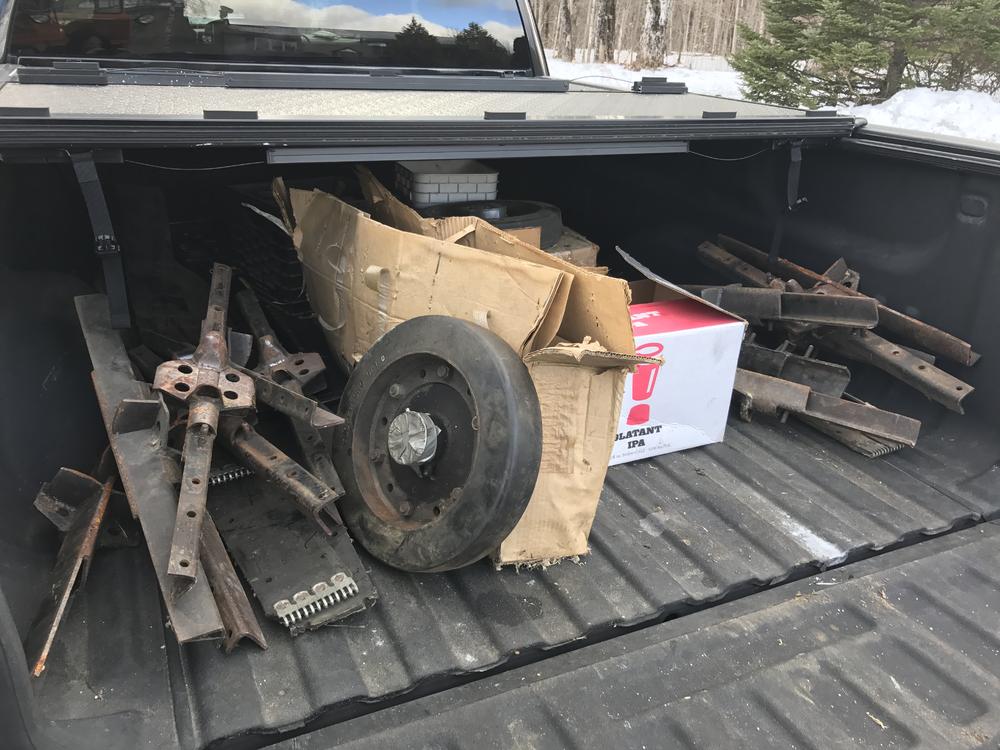 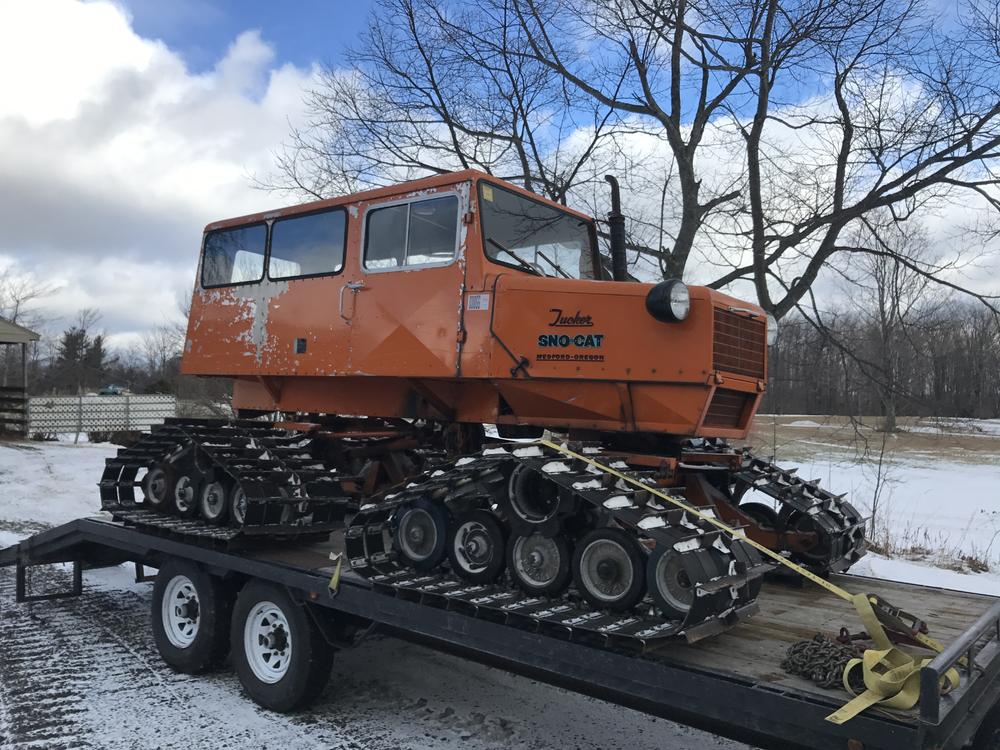 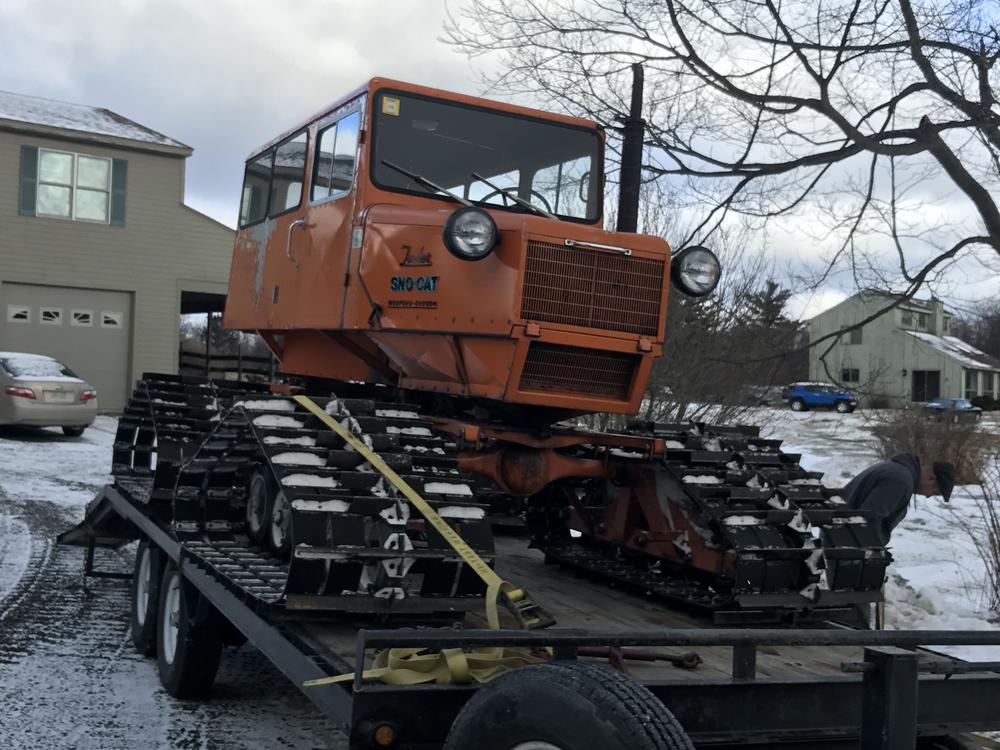 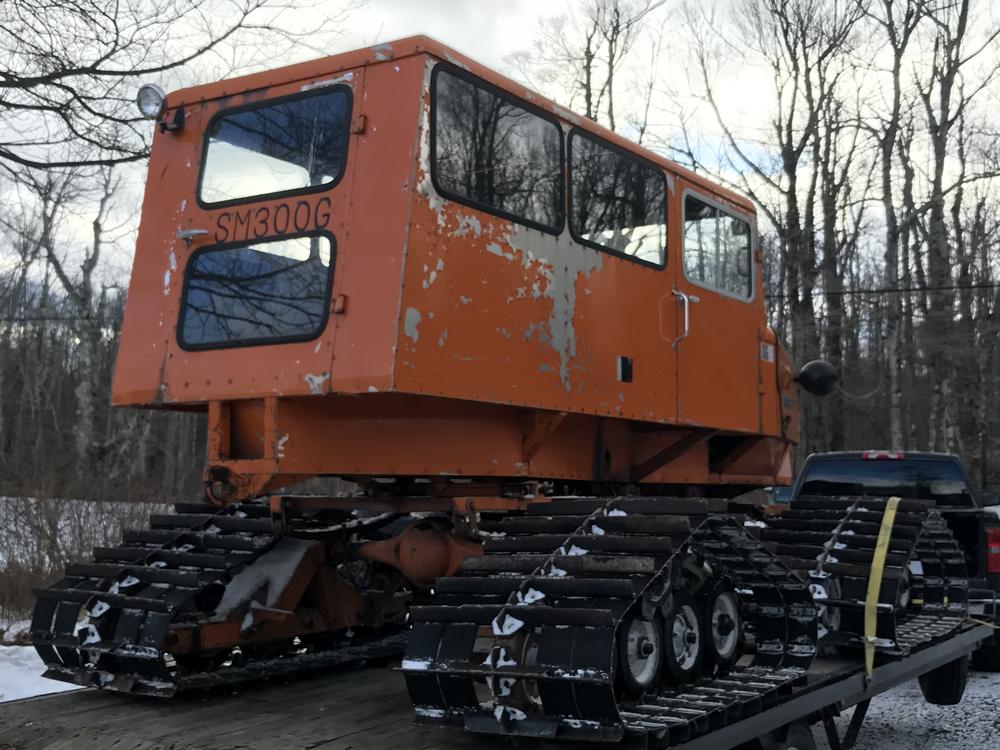 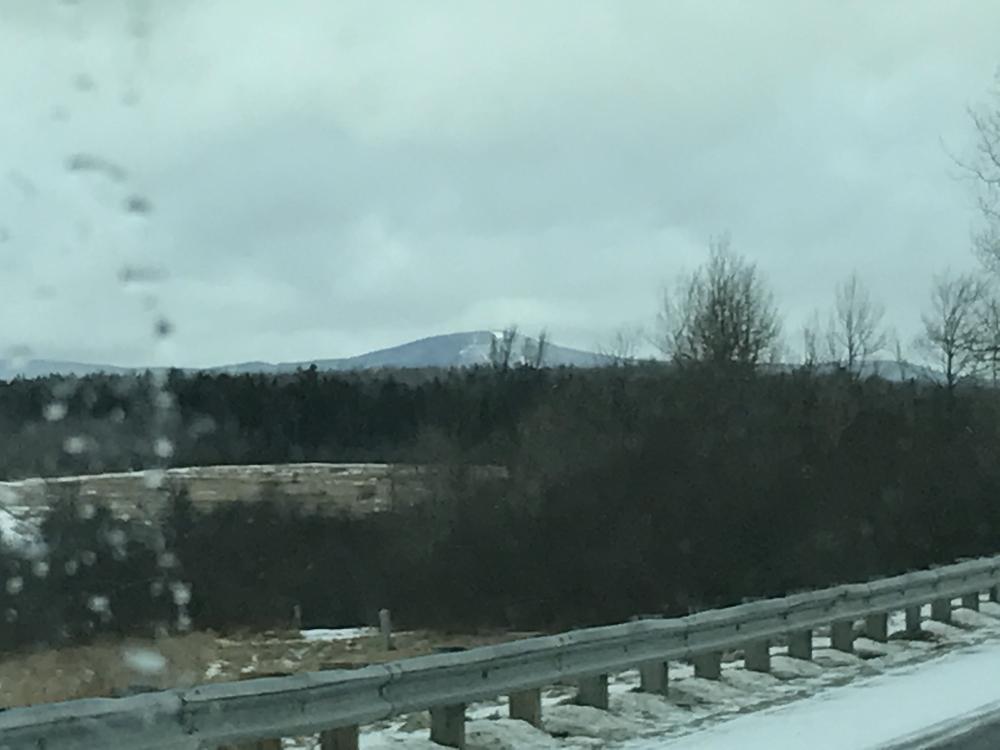 GOLD Site Supporter
I wood recommend that you cross brace your tie down straps on each end of the cat and go around the axle housing. The tracks will cut your straps. Cops around here wood write you up.

Cat looks great, I assume that the heater works good, thus mama is "warming up". I don't care if anything on my cat works as long as the heater does. Good luck and take care.

GOLD Site Supporter
My assistant didn't feel like getting the chains out of the bed of the truck for the front but did for the back. First new strap pulled out was cut from my last tucker haul. Hate straps on the big stuff but so easy.

Tucker in Massachusetts? No law enforcement would dare. Maybe an escort for being awesome!
B

sno-drifter said:
I wood recommend that you cross brace your tie down straps on each end of the cat and go around the axle housing. The tracks will cut your straps. Cops around here wood write you up.
Click to expand...

My technique is to use what are called axle straps (link: https://www.amazon.com/Axle-Straps-Hauler-Downs-Wrecker/dp/B005C5DZR8) and loop them around the axles just outboard of the spring perches at all four locations. If you look at the link you'll see the axle straps have rings at each end. I use ratchet straps that have clips, rather than hooks (but hooks should work), and I clip one end of the ratchet strap through both rings. On the trailer I have welded D-rings (link: https://www.amazon.com/2-inch-Capac...coding=UTF8&psc=1&refRID=W286NGF1RKMVW4KWYGGK) and the other end of the ratchet strap gets clipped to the D-ring diagonally across the trailer. This method is pretty painless and does an excellent job of securing the machine to the trailer.

GOLD Site Supporter
You know, it only needs a quick shot of Orange to keep mama happy. Wives like shiny things!!

GOLD Site Supporter
She got something shiny alright. I only get to enjoy it when she is giving me the finger behind the boys backs!

At least she can ride in be cat...

GOLD Site Supporter
Been tinkering and looking over the cat. Few things to work on.

Battery drained over weekend to zero volts. New Batt. Think some items are not keyed power. Will investigate this.

Need to build a rear step/steps for better egress.

Temp sensor pegs quick on warmup. From what I can tell it has a Chrysler auto sender and has the wrong ohm range for the Stewart warner green line gauges. Was 80 ohm room temp 25 ohm at temp. Checked everywhere infrared temp and its running nice. I believe Stewart warner 280EA is correct.

Needs two pieces of glass. Back door glass crack is a result of the bumper missing that rests on the door cross support. This results in the window being the bumper hence cracked. Windshield easy fix.

Little carpet glue in a few spots, vacuum, and dust.

Have a wiper question I will ask on the parts repair thread because it appears universal and multi cat.

Cosmetically have a few dents in the hood to work on. The garage door where it lived came down on it life. No sharp creases so a little skilled pounding should do it. Paint is flaking. Leaving as is. Looks like tucker did not use primer back in the day. Lioks kind of cool.

It being a radio cat it had a cb antenna which was removed and covered with tape. Move here is to put one back on for asthetics unless someone has a better idea.

GOLD Site Supporter
Fixed the wiper issue. Linkage bent. Not sur if man or motor created but good for now.

Figured out a nice plug and play stereo solution. This is out of the old cat but have a bigger newer version of this that is in a warm weather ride we may need to share. Plenty of room for a nice clean plug and play sub woofer up font also.

The space and view it takes up is only if the hood so this should work well.

Where is the "run yourself over" inhibitor switch?

GOLD Site Supporter
It has soft rubber tracks. Was thinking it would be a spontaneous massage option?

Has a foot and hand brake so the odds of one being on have increased 100%.

GOLD Site Supporter
Nice looking Tucker, Love the extra room of the sedan style. Looks like a good solid machine with lots of potential. We love our rubber track and can't wait to get one of the steel track sedans rebuilt, so then will have a comparison of the capability and flotation.

GOLD Site Supporter
Don't want to disappoint anyone but for the official Tucker Sno Cat record I can tel you pontoons/rollers will out perform rubber all day any day!

GOLD Site Supporter
Can hardly wait, that is pretty amazing .
B

Track Addict said:
Don't want to disappoint anyone but for the official Tucker Sno Cat record I can tel you pontoons/rollers will out perform rubber all day any day!
Click to expand...

Please tell me your not basing the rubber track Tucker's performance on a 1500 series machine, with a 225 six cylinder engine.

GOLD Site Supporter
a 1500 with the light little slant 6 should preform pretty good, just not very fast. there are some physics, that in some conditions that the pontoon ladder track combo may be more effective, I would believe in cold sugar snow that the belted track would have the edge for traction, where as the pontoon would like likely have an edge in wet snow where compaction can take place

GOLD Site Supporter
the comparison here is the snow traction/floatation on a 400 and 500 series pontoons/rollers to comparable rubber track tuckers of the same size series. On the steep and deep.

Motors would be a different story. That small block in the 442 has loads more power over the 225.

GOLD Site Supporter
Looks like a McCall shoot out is in order .

What does the spec plate say?

GOLD Site Supporter
1443 5 wheels per track. Maybe because pontoons were still standard and this was and option back then?

Track Addict said:
1443 5 wheels per track. Maybe because pontoons were still standard and this was and option back then?
Click to expand...

Your stamped data plate is interesting. I'm very curious as to the actual weight of your Tucker. I'm suspicious that the listed 4,600 lbs is the weight for a pontoon equipped machine. I say that because I have a Tucker 1500 series brochure and spec sheet dated 9/78 and it lists the unladen weight as 5,970/6,310 lbs (undoubtedly different cab configurations).

Further on it lists "Engine: Standard, Chrysler 318 CID V-8" with no optional engines available. For transmissions it lists "Transmission: Standard, N.P.G. 540 (5 Forward/1 Reverse) and two automatic options a Chrysler A 727 and an Allison AT-540.

I'm thinking the rubber track system weighs more than the steel track/pontoon system (and may require more power to turn it). I suspect Tucker then decided to use the 318 because of the extra weight/power requirements, but that's supposition on my part...

GOLD Site Supporter
They list the weight of each ATV track conversion as approx 400 lbs. I would say that is close to a pontoon, sprocket, track, and rollers.

Towing it felt same and it sits in the same spot as the 442. I did have the 442 on top of me. When this one runs me over I can make a better weight comparison!

so how much faster was the old steel track then your new rubber one ?

GOLD Site Supporter
On the no sno steel track is faster. Think on the snow rubber is going to cruise a little faster.

There is a guy on Lake Winni that modified a rubber like mine. Changed the gearing in the diffs. Cruises 25 on the lake. Has to be pushing the machine tracks hard!

My old rubber track was a dog thats why I went with a the steel track freighter. still haven't taken it out tho so I don't know . I drove a 542 like your old one in Aspen tho and it hauled up hills like my old rubber did down hill lol. I think it has alot to do with resistance. I always felt that if my old rubber track had a diesel it would have been able to keep up

GOLD Site Supporter
We don't really get the snow out here but with the little test run the 442 v8 has much more up hill power at very low rpm. The slant did well just a littler higher rpm. Still learning!

Here are some specs across the models.

interesting ill give you some feed back once I get mine out .

also mine had an ID tag that stated not do go over 3600rmp . dos yours new one say something similar ? I always assumed this was for that tracks not the engine .
B

aaron tucker said:
also mine had an ID tag that stated not do go over 3600rmp . dos yours new one say something similar ? I always assumed this was for that tracks not the engine .
Click to expand...

I think the engine RPM limitation was for the hydraulic pump. Vickers, the hydraulic pump manufacturer, recommends a maximum RPM of 2,500 RPM (dependent on pump volume output). Tucker uses a larger driven pulley on the pump than the drive pulley on the engine crankshaft harmonic balancer to slow the pump RPM relative to engine RPM. IIRC, the pulley geometry works out to 3,333 engine RPM equals 2,500 pump RPM.
B

Track Addict said:
We don't really get the snow out here but with the little test run the 442 v8 has much more up hill power at very low rpm. The slant did well just a littler higher rpm. Still learning!

Here are some specs across the models.
Click to expand...

Interesting specifications... I've never seen those before. Thanks for posting that.

I'm curious as to what ring and pinion ratios Tucker used then. The axles look like Dodge corporate axles and at some point they changed to Dana 60's. All four of my Tuckers have had Dana axles, and all used 4.88:1 gear sets.

In my experience when you start going fast (a relative term in a Tucker) the engine is working hard, and there's a whole lot of rotating mass in the belts and grousers. Maybe you get used to it, but I'm a little uncomfortable over 12 MPH or so. It seems like you're putting a lot of stress on the system components, and that typically leads to premature failure.

To me, the advantage of a more powerful engine isn't necessarily top speed, but rather you can run that 8-10 MPH sweet spot up hills, and in deep snow, in a higher gear than you can with a less powerful engine.
You must log in or register to reply here.
Share:
Facebook Twitter Reddit Pinterest Tumblr WhatsApp Email Share Link
Top